Review: 'Coraline' is glorious and deep

(CNN) -- There is a lot of excitement around the potential of "stereoscopic" movies ("3-D" to you and me). Much of it has been drummed up by director James Cameron's forthcoming blockbuster "Avatar" and Dreamworks boss Jeffery Katzenberg, who is releasing more than a dozen 3-D pictures this year. 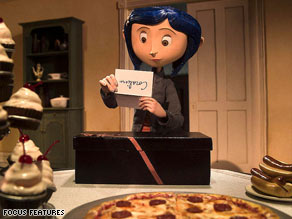 The title character looks over a note from her "other parents" in "Coraline."

After seeing "Beowulf" and "Journey to the Center of the Earth," two recent entries in the 3-D sweepstakes, it was easy to conclude that this fad wouldn't last any longer than it did last time around, in the 1950s. But after seeing the captivating "Coraline," the first stereoscopic stop-motion animated feature, I've changed my mind.

Maybe this really is the next phase for motion pictures -- and what's more, maybe that's not such a bad thing.

In the hands of "Nightmare Before Christmas" director Henry Selick, 3-D isn't a gimmick or the ocular equivalent of an obstacle course. It's an aesthetic enhancement, layering the story and literally bringing depth and texture to the visuals.

Adapted by Selick from Neil Gaiman's novella (the same Neil Gaiman who co-scripted "Beowulf," incidentally), "Coraline" is a contemporary fairy tale about a bored, blue-haired 11-year-old kicking around a big old house in rainy, empty Oregon. Her parents are writers. They basically leave her to her own devices, so when Coraline (voiced by Dakota Fanning) discovers a diminutive door hidden behind the wallpaper, her mom (Teri Hatcher) agrees to fish out the key, revealing ... a brick wall.

It's only at night, when she dreams, that the door magically opens to a tunnel, and Coraline passes through to the house next door: a fabulous mirror image of her own home, right down to an identical mom and dad. Identical, except that these parents give her pancakes, presents and their full attention. That, and the buttons stitched into their skulls where their eyes should be.

Any parent will immediately recognize that this "other mother" and "other father" are too good to be true (they're prettier and more talented, and they obviously don't work for a living), but Coraline is entranced by the dazzling, super-saturated night-world, with its garden of snapping dragons, a circus of performing mice and all the treats she can eat. In her dreams, the grass isn't just greener -- it's emerald.

In one of Selick's embellishments on the novel, there's a facsimile of the only other child in the valley. He's an irritating boy named Wybie, who's very much improved in his all-smiling, mute incarnation, in Coraline's opinion. At least until he musters up a scowl ...

Selick's movie can be intense and even disturbing; it could easily freak out impressionable adults, let alone their offspring. But I prefer to think of it as a feel-good movie for overworked parents. There's also a redoubtable talking cat (voiced by Keith David) to ensure that everything will come out all right.

Tapping into primal fantasies and fears, the film also echoes classic fantasy stories from the Brothers Grimm, Lewis Carroll and L. Frank Baum. The tunnel suggests the rabbit hole Alice fell down, and the crazy mirror manner in which the "other" world reflects back on reality reminds us of the doubling of actors in the film version of Oz.

"Coraline" isn't perfect. I could have done without either the downstairs neighbors -- two elderly showgirls -- or the acrobatic Russian barker upstairs (a little carny goes a long way).

But the whimsy is always offset with comic mischief and the menace of Hatcher's genuinely creepy Other Mother. The model work is extraordinary in its eccentric, jury-rigged genius. A shower spouts rusty water -- fabricated from plastic, apparently. And if you examine the blooms in Other Father's garden too closely, you might see they have been fashioned from popcorn. You can't taste it -- not yet -- but in its 3-D incarnation (about half the movie's release prints will be in traditional 2-D), you'll feel you could reach out and touch.

With an dreamily sinister and seductive score by Bruno Coulais, "Coraline" never stops taking artistic risks. I hope there's a brave enough audience out there willing to take the plunge.

All About Dakota Fanning • Teri Hatcher