(CNN) -- John Travolta and Kelly Preston have returned to Ocala, Florida, with the remains of their teenage son, a family friend told CNN on Tuesday. 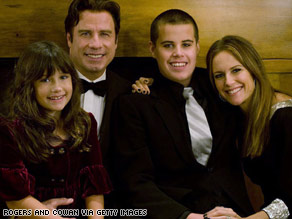 Actors John Travolta and Kelly Preston say they are "heartbroken" over their son's death.

They left the Bahamas late Monday night, said Obie Wilchcombe, a member of the Bahamian parliament.

An autopsy was conducted Monday in the Bahamas on the body of the couple's son, Jett Travolta.

The 16-year-old was found unconscious Friday while on vacation with his family in the Bahamas' West End.

He was taken to a hospital, where he was pronounced dead on arrival, local police said.

The autopsy results have not been released, but employees of the funeral home that handled the remains said "seizure" was listed as the cause of death on the death certificate, celebrity Web site TMZ reported.

An employee who answered the telephone at the funeral home confirmed the report.

The funeral home said "The body was in great condition and shows no sign of head trauma," TMZ reported.

He said Tuesday that a memorial service was planned for Thursday. Funeral plans have not been announced.

In a statement posted on the actor's Web site, Travolta and Preston described Jett as "the most wonderful son that two parents could ever ask for [who] lit up the lives of everyone he encountered."

"We are heartbroken that our time with him was so brief," they said.

The couple also has a daughter, Ella, 8.

Jett Travolta had a developmental disability that his parents have linked to Kawasaki disease, an inflammatory disorder of the artery walls that most commonly occurs in young children, and that can lead to heart disease.

According to the American Heart Association, "About 80 percent of the people with Kawasaki disease are under age 5. Children over age 8 are rarely affected."

"They're just a fantastic couple, very family oriented like a lot of people in our community," Ocala Mayor Randy Ewers, told Larry King. "We're very sad about the unfortunate events for one of our community members ... they're part of the community."

Neighbor Jacob Urbowicz described the actor as "just one of us."

"He may be famous, but he's just one of us here in the neighborhood. You know, we see the kids, and they see our kids. We're all one family here, you know. It's just not something that's supposed to happen," Urbowicz told CNN affiliate WESH-TV.