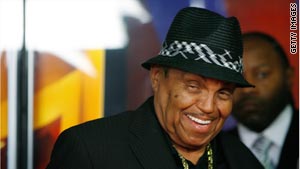 Joe Jackson has asked a judge for a monthly allowance from his son Michael Jackson's estate.
STORY HIGHLIGHTS
RELATED TOPICS

Los Angeles, California (CNN) -- Michael Jackson's father will have to wait until next month before a judge decides whether he'll get a monthly allowance from the pop star's estate.

At a hearing Thursday, Los Angeles County Superior Court Judge Mitchell Beckloff delayed arguments until January 28, because not all of the lawyers involved had been notified.

Beckloff also threw out a petition by a British woman who claims she was married to Michael Jackson when he died and is the mother of his three children.

Beckloff told Nona Paris Lola Jackson, who was on the phone from England, that her petition claiming the rights to Jackson's estate was "replete with deficiencies."

"You have no evidence you were married to Mr. Jackson," Beckloff said.

Her legal efforts to claim Jackson's children as her own began three years ago, but she filed her probate claim soon after his death last summer.

Billie Jean Jackson, another woman claiming to be the mother of Jackson's children, also was in court, but her long-standing claim was not heard.

The estate executors have not filed any objections to Joe Jackson's request for a monthly allowance, although lead lawyer Howard Weitzman did not rule out the possibility it would be contested.

The petition of Joe Jackson, the 81-year-old patriarch of the Jackson family, said he has been financially dependent on Michael Jackson for years. It estimated that his monthly expenses come to $15,000.

Jermaine Jackson said it was ridiculous that his father even had to ask.

"That shouldn't even be," Jermaine Jackson told CNN. "The fact is my father is the estate. He created the estate."

Michael's mother and his three children, who live with her now, share an $86,000 monthly allowance.

Michael Jackson died on June 25, 2009, from what the coroner ruled was "acute propofol intoxication," referring to an anesthetic. A criminal investigation is continuing.

A 2002 will placed Jackson's estate -- estimated to be in the hundreds of millions -- into a trust that benefits Michael Jackson's mother, his three children and charities to be chosen later.

Joe Jackson told CNN earlier this year that he was not surprised or hurt to learn Michael left him out of his will.

"That's the way he wanted it," he said. "And it's not going to hurt me that I was left out of his will. But it happened."

Joe Jackson's lawyer, Brian Oxman, is pursuing a legal challenge of the will, but Beckloff ruled Jackson had no voice in the matter. That decision is now before a California appeals court.

Joe Jackson is challenging Michael Jackson's signature on the will because it was dated on a day he was in New York, not in Los Angeles as the document said.

He is also challenging the fitness of John Branca and John McClain, the executors named in the will who now control the estate.

Katherine Jackson, who had engaged in a bitter challenge of her own against Branca and McClain, dropped her opposition at a hearing last month. It was a surprise to her husband's lawyer, who was in court to launch Joe Jackson's challenge.

"She has now reneged on her obligation to her family," Oxman told the judge. Oxman said Katherine Jackson's reversal was "one of the most despicable displays" he's ever seen in court.

Oxman accused Katherine Jackson of reaching a secret deal with the men who control their son's estate.

Her lawyer fired back.

"That is not only baseless, but just a product of Mr. Oxman's imagination," Streisand said.

There was no deal and it was a surprise to the estate lawyers, he said.

Four of the Jackson sons, who are promoting the premiere of their new reality show, declined to talk about the squabble.

"To be honest with you, we've been busy shooting this, and no, we've not been following the estate," Marlon Jackson said.

"But we know what's going on," Jermaine Jackson said.

Marlon Jackson said he couldn't understand why the public is so interested in negative news about the Jackson family.

"You're busy getting your little Jackson fix, we're busy trying to finish our show. We're really not interested in that part," he said. "We're trying to keep things on a more positive front and move forward on that level, because there's so many positive things that has taken place with this family."