LOS ANGELES, California (CNN) -- A pharmacist testified that he warned Anna Nicole Smith's doctors and boyfriend that a list of medications intended for Smith a week after her son's death could be "pharmaceutical suicide." 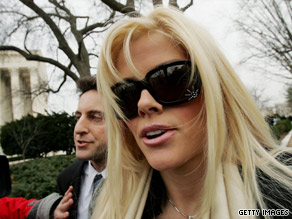 Anna Nicole Smith, with Howard K. Stern, was found dead in her hotel room in February 2007.

The three are charged with an illegal conspiracy to prescribe, administer and dispense controlled substances to an addict. Stern faces 11 felony counts, and the doctors were charged with six each. They are not charged in her death.

Smith's death in a Hollywood, Florida, hotel on February 8, 2007, came just five months after the birth of her daughter, Dannielynn, and the sudden death of her 20-year-old son, Daniel, on September 10, 2006.

Freeman testified that Kapoor faxed to him a list of six drugs that Eroshevich wanted to be sent to the Bahamas, where Eroshevich was treating Smith for anxiety and depression in the days after her son's death.

"The more I thought about it, the more concern I had that if she got hold of those medications, it could have fatal consequences" Freeman said.

The pharmacist said the dosages of the drugs were "not appropriate."

Freeman said he consulted Dr. Greg Thompson, a pharmaceutical expert, who agreed with him and who offered to talk with Eroshevich about the dangers.

Freeman said Thompson later told him that he found Eroshevich, a psychiatrist, to be "way out of her league" in her requests for strong drugs for Smith.

At the time, Smith was holed up in her home in the Bahamas mourning her son's death. Her bodyguard said in earlier testimony that the home was under siege by photographers, keeping Smith inside with her windows covered.

Thompson recommended to Eroshevich that she "forget the paparazzi and get her to a hospital" if she needed all of those drugs, Freeman said.

Freeman said the stress of the publicity after Smith's death affected his own health, especially after the celebrity Web site TMZ.com published a copy of the faxed list of medications in question.

Under questioning by the defense, Freeman said that over the previous five years he had filled prescriptions for Smith, he never saw any "red flags" that she was getting dangerous amounts of drugs.

Charges against the three defendants also include the use of false names on prescriptions.

Freeman said he always understood that prescriptions written under the pseudonym "Michelle Chase" were intended for Smith. It was a practice begun in 2001, three years before Kapoor or Eroshevich began treating her, to prevent "trouble for her in terms of her celebrity status," Freeman said.

After the preliminary hearing, which could last about three weeks, Los Angeles Superior Court Judge Robert Perry will decide whether a trial will be held.

In earlier testimony, Smith's part-time bodyguard Maurice Brighthaupt said "she just didn't want to deal with life after the death of her son."

Eroshevich, a Los Angeles psychiatrist, traveled to the Bahamas five or six times in 2006 to attend to Smith, he said. They had a mother-daughter friendship, not a doctor-patient relationship, Brighthaupt said.

"She was very concerned that we needed to wean her off the medications," Brighthaupt said.