(CNN) -- Reality TV star Tila Tequila first came to fame via social networking, thanks to her popularity on MySpace. 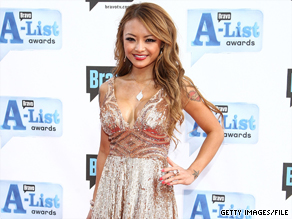 Tila Tequila went quiet on Twitter after an alleged violent incident with an NFL player.

Later, she became known as one of the most voracious celebrity tweeters, boasting more than 243,000 followers on Twitter.

But it was a more archaic form of technology -- a phone call to police -- that briefly quieted her social media activities and thrust the petite personality into the national spotlight after an allegedly violent encounter with an NFL player.

Tequila, whose real name is Tila Nguyen, said she was assaulted by Shawne Merriman, a linebacker with the San Diego Chargers. He has denied the charges.

According to a statement from the sheriff's department of San Diego County, California, authorities responded to a disturbance call early Sunday from a woman who said she had been choked and restrained by a male.

When police arrived, "the reporting party identified herself as Tila Nguyen, aka Tila Tequila, and her alleged assailant as Shawne Merriman," the statement said.

Merriman was taken into custody on suspicion of battery and false imprisonment, the sheriff's department statement said.

Merriman's attorney, Todd Macaluso, told reporters that Nguyen was "extremely intoxicated and inebriated" at the time of the incident and that the player tried to make arrangements for her to leave the house.

After hours of Twitter silence, Nguyen tweeted Sunday evening that she was safe at home in Los Angeles and thanked fans for their concern and support.

She also appeared to deny Merriman and his attorney's claim by tweeting, "I am allergic to alcohol. It has been publicly known for years. That is how I got the name Tila 'Tequila' cuz the irony. I can't drink."

For a few hours on Monday the privacy setting on her Twitter page, @officialTila, was turned on to protect her tweets from being viewed by outsiders.

Ian Corbin, founder of CelebrityTweet, said Nguyen is one of the top celebrity tweeters, often posting more than 100 tweets a day.

Her abundance of followers has earned her a ranking of "hot," said Corbin, whose site gathers the tweets of about 250 celebrities. Nguyen went quiet before, he said, when there were rumors that she was pregnant by a hip-hop artist.

Corbin said he is not surprised that her tweeting has decreased in light of the incident.

"She probably has a legal team telling her not to say much," he said.

Ardent Tequila fans on Twitter are known as members of the "TilaArmy," and many rallied online after learning of the incident.

"@officialTila you know your #TilaArmy is here 4 your support no matter what!!!!," tweeted user BeToRC.

Sasha Pasulka, head writer of the entertainment Web site Evil Beet, said Nguyen may have fallen into the trap that many face in their pursuit of celebrity: not being able to shield their personal lives.

"The fame doesn't stop just because something bad happens to you and you want some space," Pasulka said. "It's the same thing you saw with Britney Spears and Lindsay Lohan."

The high-profile nature of the domestic violence case involving singers Chris Brown and Rihanna has heightened public interest in such incidents, Pasulka added.

In one of her postings, Nguyen offered a few hopeful words early Monday morning via Twitter: "The truth will set you free. ... God is with me."