(CNN) -- Sometimes, the effects of fame can ripple like a stone dropped in a pond. 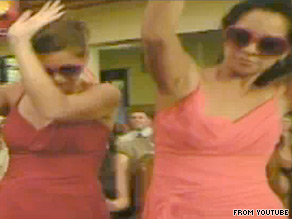 A YouTube video shows a Minnesota wedding party dancing down the aisle.

Take the case of Minnesota residents Kevin Heinz and Jill Peterson. The couple had a fun idea for their wedding party to do a nontraditional procession to a catchy tune, "Forever" by Chris Brown.

The joyous video of the group busting their loosely choreographed moves down the aisle went viral after the newlyweds posted it on YouTube. Soon they were being deluged by the media and flown to New York to appear on national television.

Since then, millions have watched the funky wedding march and helped transform Heinz and Peterson into instant celebrities.

Amy Carlson Gustafson, a pop culture reporter for the St. Paul Pioneer Press, reported on the story that she said has not only stirred up the hometown folks, but also showed a different side of Minnesota.

"I think people are loving it," she said. "It's really fun and it's especially fun in Minnesota where a lot of people think we are a bunch of uptight Scandinavians who sit around and say 'You betcha.' This video helps to debunk that a little bit."

That sense of fun and whimsy has enchanted many and led to Heinz and Peterson being sought for interviews by everyone from their local publications to the major networks.

Watch guests at the wedding discuss the experience »

But they have apparently also learned quickly about the downside of fame.

The New York Post reported the pair was caught in the crossfire of the battle of the morning shows.

According to the newspaper, ABC flew Heinz and Peterson to the Big Apple after booking them to appear on "Good Morning America."

Things soured, the paper's Page Six column reported, after ABC learned the couple had also taped a segment for the rival "Today" show, which aired before the couple's appearance on "Good Morning America."

Adding fuel to the fire was a planned live re-creation of the dance by the wedding party scheduled for Saturday morning on "Today."

When it appeared that Heinz and Peterson weren't adhering to the age-old "dance with who brung ya" rule, their ABC-sponsored hotel and flight home were canceled, the paper said.

"We've been kicked out of our room," Heinz told the Post after the incident. "New York is cutthroat. That's what we've learned."

"Today" reportedly stepped in and secured a new room and flight for Heinz and Peterson.

Reporter Gustafson said she spoke with mother-of-the-bride Marge Peterson, who said her daughter and new son-in-law were done talking to the media.

"They are not used to this type of publicity," Gustafson said.

The 27-year-old from New York posted a video last year of himself mimicking step-for-step Beyonce's dance moves from her "Single Ladies (Put A Ring On It)" music video.

Mercado said he did it at the suggestion of a friend and before he knew it, he was a YouTube sensation.

"Once I did it I thought 'What did I just do?' " he recalled. "The response was overwhelming."

Soon, Mercado was a minor celebrity being asked for autographs and dancing his routine on the "Bonnie Hunt Show."

Not only did the superstar singer know who he was, Mercado said, but so did other celebs.

"The actress Gabrielle Union knew who I was," Mercado said. "That just blew me away.'

Mercado said he doesn't consider himself famous and finds the notoriety humbling.

The loss of anonymity is challenging, he said. Suddenly, the number of people "in your business" dramatically increases. He said he can imagine how Heinz and Peterson are feeling: overwhelmed.

"That was their [wedding] and it was probably very private to them," Mercado said. "It can be a bit much to handle and if they were not ready to handle it, then it's not a good thing."

Being sucked into a vortex of whirlwind publicity can be a heady experience, said Atlanta, Georgia-based photographer Ross Oscar Knight.

Gray rented 10 rooms at the Ritz-Carlton, Buckhead, and filled them with rose petals, candles, and music.

As Gray led Williams to each room, friends and family were waiting with well wishes and prayers, all leading up to his proposal.

A slide show of Knight's pictures of the moving event scored millions of hits and crashed several sites linking to it, the photographer said.

"I immediately started getting calls from all over the world," Knight said. "We got an extra phone line because so many calls were coming in."

Not only were people touched, but many also wanted to have their engagements documented, Knight said, so there are sure to be dancing-down-the-aisle videos to come.

Knight said Gray and Williams, whose fairy-tale engagement attracted the attention of national publications like Essence Magazine, have married but decided to do so quietly after shutting down a Web site they had started to keep fans updated.

"They did a private ceremony because they didn't want any of that released to the media," Knight said. "I think they got to see stardom and what can happen when there is so much of a focus put on you."

Someone else who has also been thrust into the spotlight, albeit again, is singer Chris Brown, whose song the Heinz-Peterson wedding party danced to.

Despite increased demand on iTunes for the single "Forever" and speculation by media outlets like Gawker.com that the wedding video could help rehabilitate Brown's image, US Weekly staff editor Lindsay Powers said she doesn't believe all will be forgiven.

Brown, who has publicly apologized for assaulting his girlfriend, the singer Rihanna, has a long way to go before the tide of public opinion can be swayed, Powers said.

"I think that Chris Brown has had considerable career damage over these past couple of months," she said. "I think that people are going to say that's a catchy song, they'll go to iTunes and download it to their iPods, but I don't think that because people like the song they are going to like Chris Brown."