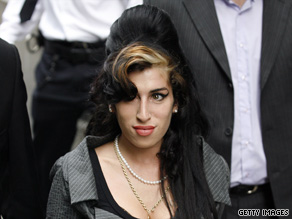 Singer Amy Winehouse was accused of hitting a woman at a charity ball last year.

Winehouse was accused of assaulting a woman at a London charity ball last year. She had pleaded not guilty to the charge of common assault.

"Amy would like to thank her family, friends, and her legal team for their support during this difficult time," said a statement issued by her spokesman. "She has always maintained her innocence and is very happy to move on with her life and put this episode behind her."

The verdict will be good news for the troubled singer, who returned to Britain this month after spending six months on the Caribbean island of St. Lucia.

Winehouse has publicly battled drug addiction, and this month a judge granted Winehouse and her husband, Blake Fielder-Civil, a divorce. It is scheduled to be made final next month.

The Grammy-winning artist arrived at court Friday wearing a white shirt, gray blazer, black skirt and pink ballet slippers. Her hair is back to her trademark black beehive with a blond streak, in contrast to the natural curls she sported while in the Caribbean.

Winehouse is famous for her retro, soulful R&B sound and has had a string of hits including "Rehab," "Back to Black," and "Tears Dry on Their Own."