(CNN) -- Michael Jackson's life has ended, but the legal battles over his possessions, his debts and his children are likely just beginning. 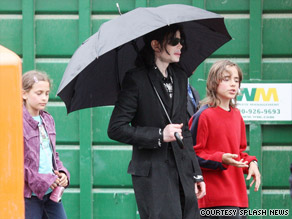 Normally in such cases, care of the children would be taken over by the surviving parent or a close relative.

But as with many other aspects of Jackson's life, his family situation was complex, unusual and far from normal.

Born to two mothers -- Jackson's ex-wife Debbie Rowe and an unidentified woman who reportedly served as a surrogate -- the children lived and traveled the world with Jackson, their faces often covered by veils and masks when appearing in public.

Rowe gave up her parental rights to her two kids with the singer, but later battled to have them restored.

She may be considered to take over custody for Prince Michael I and Paris, said CNN senior legal analyst Jeffrey Toobin, who has followed Jackson's legal woes for years.

"Certainly any court that is looking at that sort of question will say, if the father dies who is the mother and would we consider giving the children to the mother?" Toobin said.

"As I understand it, in later years after a substantial amount of time when Debbie Rowe didn't see those children at all, she started to have a relationship with them again. So she'd certainly be an obvious candidate for custody of those two children."

The question of custody for the third child would be even more up in the air since his mother was likely never involved in his life, Toobin added.

The three kids are staying with their paternal grandmother, Katherine Jackson, People magazine reported. She may just wind up keeping them, observers said.

"Katherine is the logical choice -- she has all the grandkids and nieces around her but it will be up to the courts," said Brian Oxman, a former Jackson family attorney, according to People.

"I wouldn't be surprised if there are more proceedings regarding the children."

Complications may already be looming on the horizon.

Katherine Jackson may wish to keep the children, but Michael Jackson wanted them to be taken care of by their nanny if anything happened to him, ABC News reported, quoting Stacey Brown, co- author of "Michael Jackson Behind the Mask."

Meanwhile, Rowe's former attorney tells People that a judge returned parental rights to Rowe in 2005, so she is the legal parent of her two children with Jackson and can gain custody of them.

Instructions specifying who should care for children after a parent's death are often left in a will, but it's not known whether Jackson had one prepared before his untimely passing.

"Michael Jackson led an extremely chaotic financial and legal life. ... Given how chaotic his life was, did he even have a will?" Toobin said.

Beyond the question of Jackson's children, a will may also be key to answering questions about what's left of his estate. The pop star's financial ups and downs have been as well-chronicled as his personal problems, including a near-bankruptcy and the threatened foreclosure of his Neverland ranch.

Jackson accumulated almost $500 million in debt by living large over the years, but he also had considerable assets when he died, including his own music royalties and a 25 percent stake in a music publishing library that contained many Beatles songs, Fortune reported.

Those assets might prompt new legal battles and it may be a long time before the dust settles.

"[Jackson] was surrounded by some of the sleaziest, most unethical advisers who came in and came out and he has had a tremendous amount of litigation in his life," Toobin said.

"His death will be followed by a great deal of further litigation. ... The sad thing about that is that if it does, it will be part of a pattern that those of us who followed Michael's life saw, which is that ... lots of people with no talent, with none of his charisma, with none of his spirit, lawyers, publicists, hangers on who made money off of his earnings continuing after his death."