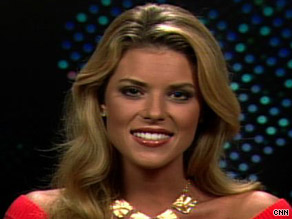 Prejean garnered widespread criticism when she declared her opposition to same-sex marriage in a response to a question posed to her during the Miss USA pageant.

Prejean was allowed to keep her Miss California USA crown in May, despite a controversy over topless photos and missed appearances. However, state pageant Executive Director Keith Lewis took her crown on Wednesday, saying it was a business decision based solely on "contract violations."

Prejean offered her side of the story when she spoke with CNN's Larry King on Friday. She also discussed whether she would sue to reclaim her title and her future plans. The following is an edited version of the interview.

Larry King: You've had a couple of days now, Carrie, to think it all over and it's sunk in. What are your feelings today?

Carrie Prejean: I'm definitely a little bit surprised just by the way that I found out about this. You know, I was called by the media to inform me that I was fired.

King: Are you saying the pageant didn't call you?

King: Now, since they were so supportive of you at the time and after the Trump announcement, what do you make of the fact that they didn't call you?

Prejean: Well, I think Mr. Trump was definitely in the middle. And I think that, you know, he has only heard one side.

King: How do you respond to (charges from Lewis)?

Prejean: Well, Larry, all I can tell you was this basically comes down to the answer that I gave the night of the pageant. As you can see, Mr. Lewis does not agree with the stance that I took. I think he's very angry. I think he's hurt. He said in a previous statement that he's deeply saddened and hurt that -- what Carrie Prejean believes in -- a marriage is between a man and a woman. Politics and religion have no play in the Miss California family.

My question is, then why was the question asked at the pageant in the first place? If politics has no role in the pageant, why was I given this question?

It was a hidden personal agenda that judge No. 8 asked, and I think that they were not ready for my answer that I gave.

King: Let's say they were upset by your remarks. They didn't like your answer. Why didn't they just tell Donald Trump, we're unhappy and let's pick the runner-up or whatever?

Prejean: He absolutely did. I mean Keith Lewis held a press conference in Los Angeles and didn't invite me to the press conference and, you know, awarded the first runner up as the new ambassador of California. That is just undermining me and undermining his own titleholder from day one.

Watch how e-mails between Prejean, Lewis may have contributed to firing »

As far as the other appearances, I've had some inappropriate appearances that Keith Lewis has asked me to do. And I'm sure you're aware of them already -- one of them being Playboy; another one being a reality show which is being filmed in Costa Rica. So had I said yes to these, I mean, I would have been out of the country.

It just doesn't seem right, Larry, does it?

King: Are you now sorry you even entered. Or, in retrospect, has this been a boom for you publicity-wise?

Prejean: You know, this isn't something that I signed up for, Larry. I simply entered in a pageant, the Miss California USA contest, and I gave an answer that a lot of people weren't expecting.

If you want to ask Keith Lewis any appearances that I have made prior to the Miss California U.S. pageant, I will guarantee you, Larry, he will not even -- he can't even tell you an appearance that he -- he scheduled for me.

This isn't about appearances. This isn't about a breach of contract. This is about Keith Lewis not agreeing with the stance that I took on saving traditional marriage. And from day one, he wanted me out.

King: Well, are you going to sue, Carrie?

Prejean: That's -- you know, that's something that is not something that I want to -- I want to do. I think that what's going on is wrong. And I think that there is definitely some information that is missing. And I know that sooner or later, the truth will come out and people will recognize here who's right and who's wrong.

Prejean: You know, that's up to my lawyers to determine whether or not they think that there will be a lawsuit involved. But that's not up to me, at this point.

King: What are you going to do right now, career-wise?

And I know that when God is for you, no one can be against you. So thank you.

King: Can you tell us what you're going to do, though?

I'm just really excited. I feel relieved. I feel just so blessed and so honored to have represented the state of California. And I'm ready to move on with my life and just be where God leads me.

All About Carrie Prejean • Donald Trump