(CNN) -- They were taken before Marilyn Monroe became branded as the voluptuous blonde who oozed sex appeal in dozens of Hollywood films. 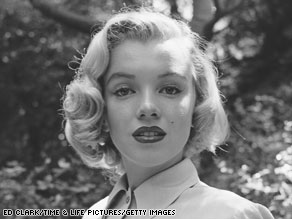 A 24-year-old Marilyn Monroe poses for Life magazine in August 1950.

They were taken before rumors of an affair with President John F. Kennedy swirled and her mental breakdowns became public.

They were taken before the beautiful actress's mysterious overdose that resulted in her death at the age of 36.

In a collection discovered by Life.com last month, unpublished photographs of Monroe reveal a softer, more innocent 24-year-old budding starlet in a more peaceful time, before her fame peaked.

Her flawless face bears a natural look with minimal makeup, unusual for the star, who was often glamorized in photo shoots with lipstick, designer dresses and expensive jewelry.

Monday would have been Monroe's 83rd birthday.

In one photo, the young Monroe lies in bliss, reading on a park bench, which editors at Life.com believe was shot at Griffith Park in Los Angeles, California. In another, her face is serene as she is perched over a bridge barefoot. The shoot, which dates to 1950, was conducted by Life photographer Ed Clark.

It's a side of Monroe that the American public has rarely seen.

"She hasn't really exploded as a star, yet she was on the brink of something big," says Dawnie Walton, deputy editor at Life.com, a Web site harboring more than 7 million Life magazine photographs. The site was launched in March.

"I was amazed looking at her face. Although she looks very innocent, there is something very ... sexy."

Last month, Walton stumbled upon the rare photographs while combing through the company's digital photo archives. Apparently, no one at Life.com even knew they were ever taken.

Upon investigating the photos, Walton says, she found there were few notes left on the negatives. She says the photos were probably taken for a cover shoot that was never used. Monroe appeared on her first Life magazine cover in 1952.

See some of the previously unpublished photos of Monroe »

"It just got lost and stowed away," Walton said. "It was just ... somewhere in a warehouse in New Jersey."

At the time the photos were shot, Monroe had her first small breakout role as a mistress in "The Asphalt Jungle." The star was better known as a model at the time, though she'd had a handful of cameos in films.

Photographer Ed Clark told the Sarasota Herald-Tribune a friend from 20th Century Fox alerted him that the studio had just signed "a hot tomato."

"She was unknown then, so I was able to spend a lot of time shooting her," Clark said. "We'd go out to Griffith Park and she'd read poetry. I sent several rolls to Life in New York, but they wired back, 'Who the hell is Marilyn Monroe?' "

Photographs later in the 1950s and early 1960s would display a much more confident and sexual Monroe -- images that would become iconic in popular culture.

There is the famous photograph of a busty Monroe in a white halter dress, standing with her skirt blowing up in 1955 for her role in "The Seven Year Itch." In 1962, American photographer Bert Stern shot a tipsy, sometimes nude Monroe in a series of delicate shots that would be known as "The Last Sitting." Monroe died about six weeks later, on August 5, 1962.

Life.com staff members say there are 15 million photographs in the Life archive dating back to the late 1850s, even before Life officially began publishing in 1936. Two years ago, the publication began slowly transferring the photographs into a digital archive.

From time to time, unpublished photographs will be found that the company doesn't know existed. Other times, the photographs may have been taken but never selected to be used for publication.

All About Marilyn Monroe • Celebrity News