(CNN) -- Donald Trump will let Miss California USA Carrie Prejean keep her title despite controversy over seminude photos and charges by state pageant officials that she had abandoned her duties to devote time to opposition to same-sex marriage. 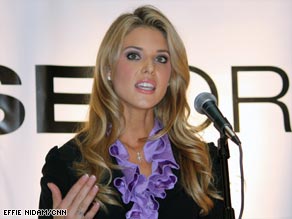 Miss California USA Carrie Prejean caused controversy with remarks she made at the Miss USA pageant.

Trump, no apprentice at turning a negative into positive publicity, brought several weeks of controversy to a conclusion at his New York headquarters Tuesday with winners all around.

Trump said his Miss USA pageant stays "so relevant," unlike the rival Miss America pageant seen only on a small cable channel.

Prejean gained a national following that could help her post-pageant career.

The Miss California USA organization has a beauty queen better known than the woman who won the Miss USA title -- Kristen Dalton of North Carolina.

Celebrity bloggers, such as Perez Hilton, whose question to Prejean ignited the firestorm, gained a higher profile and more readers for their Web sites.

And groups both for and against same-sex marriage gained energy for their fundraising and publicity campaigns.

Prejean stepped into the limelight unexpectedly just over three weeks ago when she declared her opposition to same-sex marriage in response to a question asked during the national pageant by Hilton, a pageant judge.

Prejean finished as first runner-up, but it was not clear if her answer cost her the crown.

Hilton, who is openly gay and a strong supporter of same-sex marriage, later posted a video rant online in which he called Prejean "a dumb bitch."

This caught the national mainstream media's attention, and Hilton was invited to appear on TV shows to talk about it.

But when she appeared at a news conference for the National Organization for Marriage, a same-sex marriage opposition group, the controversy intensified.

Lawyers for the Miss USA group demanded that NOM stop using video clips of the pageant in its TV ads.

The controversy boiled to a new level last week when a photo of Prejean, wearing only pink panties but showing mainly a bare back, was published by gossip Web sites.

Miss California USA officials -- some of them outspoken advocates of same-sex marriage -- suggested that the seminude photo breached the contract Prejean signed with the pageant. Her title might be taken away, they said.

These officials also complained they couldn't reach Prejean and she had missed important pageant events. They charged that their beauty queen had been hijacked by anti-same-sex marriage forces.

But it was up to Trump, who bought the Miss USA and Miss Universe pageants a decade ago, to decide what to do about Carrie Prejean.

It ended with hugs and smiles at Trump's news conference.

Those photos of a topless Prejean do not violate the contract she signed when entering the pageant competition, Trump said.

"Some were very beautiful," he said. "Some were risque, but again, we're in the 21st century."

Trump praised Prejean for giving a "very, very honest answer" to a tough question during the pageant.

"It's the same answer that the president of the United States gave," he said.

And he said he would not hesitate to invite Hilton back as a pageant judge, despite the firestorm he set off.

"We want tough questions," he said. "We don't want to be in a position that Miss America is in that they're now on a small cable channel."

Prejean said she has forgiven Hilton and the other critical bloggers.

"I willingly forgive them before all of you today," she told reporters.

She said she was the victim of "hateful attacks, despicable rumors and false allegations" for exercising her freedom of speech, but the situation has given her a new message to carry as a role model to young people.

"Think about how much better our society would be if we could just agree to disagree and show respect," she said.

As she resumes public appearances as Miss California USA, Prejean said she will not be an activist against same-sex marriage.

"I'm going to resume my duties as Miss California, but also stay true to who I am and have my own personal opinions," she said. "We will see how we will balance the two."