(CNN) -- Altovise Davis, the widow of entertainer Sammy Davis Jr., has died. She was 65. 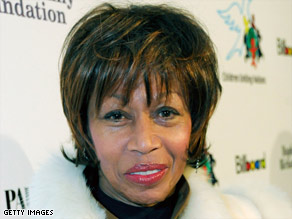 Davis died Saturday at the Cedars-Sinai Medical Center in Los Angeles, California, said her publicist, Amy Malone. She had been admitted two days earlier after suffering a stroke.

Davis, a dancer and actress from Brooklyn, New York, met Sammy Davis Jr. on the set of the musical "Golden Boy" in London in 1967. The couple married three years later.

It was Sammy Davis Jr.'s third marriage. The couple remained together until he died of throat cancer in 1990.

The couple had an adopted son.

Funeral services will be held in Burbank, California, with the date and time to be announced later.

Sammy Davis Jr., himself a musician, was famous for being part of the Rat Pack, which included Frank Sinatra and Dean Martin.