(CNN) -- As details about an alleged assault of Rihanna by her boyfriend, Chris Brown, emerged, fans and the entertainment industry grappled with what it could mean for the future of the young star's career. 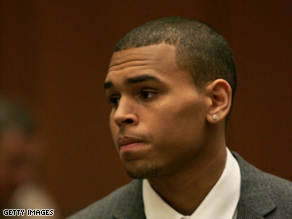 Brown appeared before a judge on Thursday, but the arraignment was delayed for a month at the request of his attorney.

Twenty-one-year-old Rihanna was allegedly attacked by Brown on a Los Angeles street before their scheduled performances at the Grammy Awards on February 8.

Message boards across the Internet were abuzz with reaction after the sworn statement by Los Angeles Police Detective DeShon Andrews surfaced. The statement painted a brutal picture of what allegedly happened in the early morning hours of February 8.

Watch Brown at his court appearance »

Emil Wilbekin, editor-in-chief of GIANT Magazine, said some readers were expressing outrage at Brown's alleged actions on postings at the GIANT Web site, writing that they hope Brown gets jail time and that justice is served.

"In Chris Brown's case, there are two things going on," Wilbekin said. "The first is that Chris is such a clean-cut young man and so this is a very shocking turn of events, because it's completely against what we know of his entertainment persona.

"The second part is that both [Rihanna and Brown] have very young female fans."

Listen to the reaction of fans on HLN's "Showbiz Tonight" »

Brown, a native of small-town Tappahannock, Virginia, made the music scene with his 2005 debut album and the single, "Run It!", which quickly topped the Billboard music chart.

His good looks and athletic dance moves quickly rocketed him to teen idol status and he solidified that reputation with a successful follow-up album, movie and TV appearances and a Grammy nominated duet with "American Idol" winner Jordan Sparks.

Stories of troubled singers are nothing new to the entertainment industry. Many artists, including Whitney Houston and Britney Spears, have been able to survive the negative press and emerge with many fans still intact.

But industry insiders like Wilbekin point out that there is a marked difference between self-destructive behavior and allegedly causing harm to another person. iReport: Share your reaction to the Chris Brown allegations

Even though Brown issued a brief apology for the incident, Wilbekin said he believes the entertainer has been hurt by the silence emanating from his camp.

"He still has not made [an extensive] statement to the public, and particularly because a lot of his fans are young women, that's not going to go over well," Wilbekin said. "I think the fact that he's not come clean about it, which I understand for legal reasons, is an issue. Not saying anything at all is not helpful, especially not for his career."

Joann Killeen, president of Killeen Furtney Group, knows a bit about crisis communications -- her marketing and public relations firm initially represented California octuplet mom Nadya Suleman before later dropping her as a client -- and agrees that silence is not always golden.

Killeen said Brown's representatives may have erred by waiting a week before issuing a statement.

"By then everybody had an idea and a vision as to what happened," she said. "Unfortunately if you don't speak and frame the issue, state what happened, state the facts that you know, someone else is going to do it for you and you lose your position of being proactive and owning the story."

While she points out that America loves a comeback story -- like actor Robert Downey Jr., who was nominated for an Academy Award this year after multiple drug-related arrests in the past -- Killeen said the public can be much more forgiving about drug abuse than domestic violence.

"I think it's going to take a concerted effort on [Brown's] part to be very vocal about asking not only Rihanna for forgiveness, but he has to convince America that he's really going to work on resolving his anger issues and putting his life back together," Killeen said.

Despite the charges, some fans are vowing to take a wait-and-see approach.

"I'm sure there are people out there that feel betrayed," said twentysomething Brown fan Kadija White of Capital Heights, Maryland. "But there are probably some people like me who still are going to like his music."

However, Devi Dev, who does the entertainment segment on urban radio station 93.5 KDAY in Los Angeles, said listeners have been extremely vocal in their support for Rihanna and their sadness at the incident.

"A lot of the ladies are just like 'I feel so bad for her. Leave him girl, leave him' and the guys are being very defensive, saying women hit men, too," said Dev.

If Brown has any hope of surviving this, he is going to have to completely reinvent himself as an artist who appeals to older fans, Dev said.

"His fan base is teenage girls and the fact that he allegedly hit a young woman, his fan base is completely gone," she said. "No parent is going to want to support their child listening to his music or buying his music."