LONDON, England (CNN) -- Vladimir Putin spent the Russian New Year boogying to the hits of ABBA after spending $30,000 to fly a tribute band to a lake town north of Moscow. 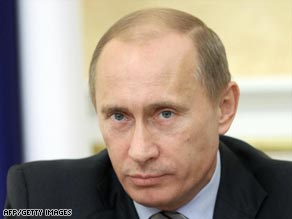 According to Bjorn Again founder, Rod Stephen, Putin disco pointed to the ABBA classics "Super Trouper" and "Mamma Mia" at a gathering of only eight guests.

Stephen said he received a phone call from the Kremlin prior to Christmas.

"It was pretty mad. It was the type of phone call everyone gets everyday from Moscow. I thought someone was taking the piss."

Stephen said an agent in Moscow then set the gig up, and he was told it was for Russia's "number two."

He said the band were flown to Moscow and then had a nine-hour bus trip to Lake Valdai -- where Putin has held high-level meetings in the past -- on January 22 (the traditional date of Russian New Year's eve).

"The band and crew were searched at checkpoints by people with appropriately sized weapons," Stephen said.

He said the band played behind a heavy gauze curtain, which made it hard for them to see the audience.

However, the could make out Putin's profile and that of the other seven guests.

Stephen said it was initially "roaring" at the venue.

"When the band started people were sitting on sofas. But then Putin was up and dancing to Super Trouper and Mamma Mia, pointing fingers up and down."

The band played for an hour before being shown out as the guests went to watch a fireworks display.

Stephen said they were paid $30,000 and their expenses covered.

He described it as the "weirdest" gig the band had done.

"I've had phone calls from the agency saying 'don't talk to anyone else we are getting grief from the Kremlin,' but there was no non-disclosure contract."