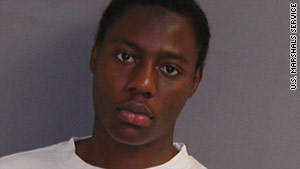 Information that Umar Farouk AbdulMutallab had a multiple-entry U.S. visa was not relayed in cables to Washington.
STORY HIGHLIGHTS

Washington (CNN) -- The State Department on Thursday is directing its embassies around the world to include information on whether a person has a U.S. visa when they send special cables to Washington containing information on potentially suspect individuals, CNN has learned.

The order comes in the wake of a failed Christmas Day attempt to blow up a U.S.-bound jetliner. The change was prompted by preliminary reviews ordered by President Obama of the terror attack.

The reviews are due to the president by Thursday.

A State Department official told CNN the information to be included in so-called "Visas VIPER cables" currently is not required by department guidelines. In the case of the attempted December 25 bombing, crucial information that the suspect -- 23-year-old Umar Farouk AbdulMutallab -- had a two-year multiple-entry visa was not relayed in the cables.

Although other government departments could have accessed that information if they wanted to search State Department databases, they were not required to do so.

The official, who spoke on background because he was not authorized to speak publicly, said the department also is looking at the possibility of notifying airlines that a person has had his or her visa revoked. Currently, there is no electronic connection between airline passenger records and State Department records concerning revoked visas.

The official said one proposal is to put an electronic note in airline records that the visa has been revoked. This would prevent such a person from flying with a revoked visa.

Currently, a State Department employee would have to personally notify the airlines directly if he or she wanted to make that information known. The new approach would automate that process with an electronic notification.

Making such a change is important, observers note, especially when a person could be flying on an international airline with a paper sticker visa in their passport. Under current rules, an airline would not know whether that visa had been revoked unless it contacted the State Department directly.