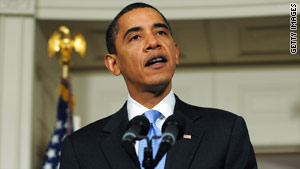 President Obama has seen a great deal of support from the African-American community.
STORY HIGHLIGHTS

Washington (CNN) -- African-Americans are extremely supportive of President Obama, but their enthusiasm appears to have dramatically dropped from earlier this year, according to a new national poll.

The CNN/Opinion Research Corp. survey, released Tuesday, also indicates that Obama's presidency appears to have made blacks more optimistic about race relations, but less than one in five believe the new president has ushered in a new era of race relations in the country.

More than nine in 10 blacks questioned in the poll approve of the job Obama's doing in the White House, far higher than 42 percent of whites who approve of his performance as president.

But when asked how they personally feel about Obama's presidency, only 42 percent of black respondents say they're thrilled, with nearly half of those questioned saying they are happy but not thrilled.

The 42 percent who are thrilled is down from 61 percent in January, when Obama was inaugurated.

The survey indicates that three-quarters of blacks believe race relations will improve eventually, which is up from 49 percent of blacks who felt that way a year before Obama was elected.

"Whites take a dimmer view of Obama's effect on race relations, with a third believing that the new presidency has not changed race relations in the country and 15 percent of whites saying that Obama has made race relations worse," Holland added. "Not surprisingly, whites are less supportive of Obama, although for a notable number of whites, their negative view of the president is due to the perception that he's not been liberal enough."