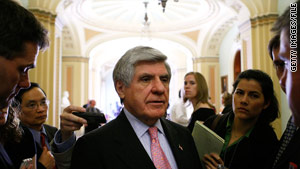 Washington (CNN) -- U.S. Sen. Ben Nelson of Nebraska on Saturday threw his support behind the Democrats' health care reform bill, giving the party the crucial backing it needed to avoid a Republican filibuster that would prevent a Senate vote.

The first of a series of votes is set for Monday at 1 a.m., on a so-called manager's amendment, consisting of amendments crafted in the last week-and-a-half by Senate Majority Leader Harry Reid of Nevada.

At the request of Republicans, the entire package of amendments -- 383 pages -- was being read Saturday, for hours, on the Senate floor.

The Senate could vote on the entire bill, a top priority of President Obama, before Christmas.

However, a House Democratic leadership source told CNN that Obama's repeated requests for a health care bill to arrive on his desk by the end of the year won't be met. The source, who spoke on the condition of anonymity due to the ongoing internal discussions within the party, said there is "no chance of a conference between Christmas and New Year's."

"If [Democrats] were proud of this bill, they wouldn't be doing it this way," McConnell said. "They wouldn't be jamming it through in the middle of the night on the last weekend before Christmas."

McConnell said the legislation "will have a profound impact on our nation. This is not renaming a post office. Make no mistake, this bill will reshape our nation and our lives."

Reid and Sen. Charles Schumer of New York spent most of Friday trying to answer concerns from Nelson, who had held back on supporting the bill because of his objections to public funding for abortions.

Schumer and others involved in the talks said Nelson didn't want to make a public announcement about his decision to back the bill until the negotiated abortion language was entered into the record.

Nelson's backing gave the Democrats the crucial 60 votes needed to move the bundle of recent amendments, which involved a spate of compromises, to the Senate floor.

"Change is never easy, but change is what's necessary in America today. That's why I intend to vote for cloture and for health care reform," the Nebraska Democrat told reporters.

Cloture is the procedure that allows senators to place a time limit on consideration of a bill or other matters, and thereby overcome a filibuster.

Nelson warned, however, that if there are changes to the health bill when House and Senate leaders meet to resolve their differences, he will withdraw his support. The House has passed a different version of the bill.

Obama said the Senate's health care reform bill would be the largest deficit-reduction measure in a decade.

"We are on the cusp of making health care reform a reality," he said.

"With today's developments, it now appears that the American people will have the vote they deserve on genuine reform that offers security to those who have health insurance and affordable options for those who do not."

According to the Congressional Budget Office, the legislation would offer a decrease in the deficit of $132 billion over the first decade, and more than $1 trillion in the 10 years after that, Obama said at a brief news conference.

The new cost for the revised Senate bill is $871 billion, the CBO said. The previous price tag was $848 billion.

Obama's was one of a flurry of press briefings held Saturday after Nelson's announcement.

Nelson, a social conservative who opposes abortion, did not want taxpayer funds to pay for the medical procedure. One of his main requests was that states that offer insurance present at least one plan without the abortion option. In addition, he was assured that anyone receiving federal health subsidies would pay separately for an abortion.

Two liberal U.S. senators who had not committed to supporting the health bill also announced Saturday that they would vote "yes" on its passage.

Sen. Bernie Sanders, a Vermont Independent who caucuses with the Democrats, said he changed his stance because the measure now contains provisions for new community health centers. Sen. Sherrod Brown, D-Ohio, said he favored the insurance reforms in the legislation.

Neither is totally pleased, but they told CNN it's a good first step.

Sen. Barbara Boxer, D-California, who was involved in some talks with Nelson, said she's satisfied that the agreement's language achieves its goal.

"My goal was to try to reach some compromise so we could move forward on health care, where the basic premise was we could separate federal funds from private funds. I think we achieved that."

Sen. Bill Nelson, D-Florida, agreed, saying the deal follows the principles of the Hyde amendment, which prevents federal funds from being used for abortions.

"Anyone who is in the exchange who also gets a federal subsidy because they're poor, if they choose a private insurance policy and want any kind of abortion coverage, they have to write that part of the premium from their own personal funds," the Florida senator said.

The health bill proposes a health insurance exchange for those unable to afford health coverage or don't have coverage. No federal funds could be used to cover abortions for people participating in the exchange, the bill says.

In addition, under national plans that would be administered by the Office of Personnel Management, there has to be, if a state chooses those, at least one that does not offer abortion coverage.

Meanwhile, two congresswomen said they had "serious reservations" about the abortion provision in the Senate version of the health care bill.

"This provision is not only offensive to people who believe in choice, but it is also possibly unconstitutional," said U.S. Reps. Diana DeGette, D-Colorado, and Louise M. Slaughter, D-New York, in a statement Saturday.