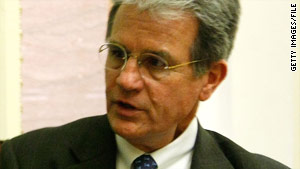 WASHINGTON (CNN) -- The congressional health care debate stalled briefly Wednesday as Senate Republicans insisted that a 767-page mega-amendment be read out loud in its entirety.

The move could have brought Senate business to a halt for the day and potentially threatened Democrats' ability to pass a health care bill before Christmas.

But Sen. Bernie Sanders of Vermont, the amendment's sponsor, withdrew the measure in order to allow the Senate to return to normal business.

The episode was the latest example of the extraordinary partisan tensions now dictating virtually every twist and turn in the politically explosive health care debate.

Sen. Tom Coburn, R-Oklahoma, set the unusual legislative tactic in motion about lunchtime. As the Senate moved to a sweeping single-payer amendment by Sanders, a liberal independent, Coburn objected to the common Senate procedure that waives the actual out-loud reading of the proposal.

Senate clerks, in response to Coburn's motion, began reading the bill, starting with the table of contents.

Republicans staunchly oppose the creation of a single-payer system, under which the government would cover the health care expenses of every American.

Coburn defended the tactic in a written statement, saying that Americans should hear competing proposals and that the health care debate needed to slow down.

"It's unfortunate that [Majority Leader Harry[ Reid waited until the last minute to introduce his bill and now wants to rush it through the Senate," Coburn wrote.

Sanders, in turn, blasted the GOP as an obstructionist minority intent on sacrificing the country's well-being for partisan gain.

The country is "facing a significant number of major crises," he proclaimed on the Senate floor. "The best the Republicans can do is try to bring the United States government to a halt. ... That is an outrage."

Reid's office said Coburn's move could have pushed back votes on other time-sensitive bills, including funding for the military.

It's "not exactly the kind of Christmas gift that our troops were expecting from Dr. No," Reid spokesman Jim Manley said in an e-mailed statement.

"Dr. No" is a common Democratic nickname for Coburn, a conservative physician adamantly opposed to most Democratic initiatives.

The episode was a reminder of the steep health care challenge still facing top Democrats, who are wrestling with solid GOP opposition and growing discontent with what many liberals now believe is a watered down Senate bill.

On Tuesday, former Vermont Gov. Howard Dean -- a former presidential candidate and past head of the Democratic National Committee -- ripped the Senate Democratic leadership's apparent decision to eliminate both a controversial government-run public health insurance option and a provision allowing 55- to 64-year-olds to buy into Medicare.

"This is essentially the collapse of health care reform in the United States Senate, and honestly, the best thing to do right now is kill the Senate bill and go back to the House," Dean said in an interview with Vermont Public Radio.

Progressive Democrats are increasingly angry over compromises that have been made in an effort to get the 60 votes needed to end Senate debate on the bill and proceed to a vote on final passage.

Unanimous Republican opposition to health care legislation means Senate Democrats need the backing of all 60 members of their caucus. Final Senate passage would require only a simple majority of 51 votes.

Most of the liberal anger has been focused on Connecticut Sen. Joe Lieberman. An independent who caucuses with the Democrats, Lieberman has been viewed as the main obstacle to the majority party's efforts to get the health care bill passed by the Senate before Christmas.

He threatened over the weekend to join a GOP filibuster if the bill contains either the public option or the Medicare expansion.

Lieberman said Tuesday that he was "moving very much in the direction of saying yes, pending just seeing what I've been told is happening with the bill."

Lieberman acknowledged that he has angered some of his colleagues but said he was acting on principle, not politics.

"I knew some of them were upset about positions I'd taken," Lieberman said. "But like each of them, I didn't get elected by telling my voters in Connecticut that I would follow the majority of my caucus even if I thought on some things they were wrong. We each have to do what we think is right."

President Obama met with Senate Democrats on Tuesday and urged them to accept a compromise and pass the bill.

"The final bill won't include everything that everybody wants. No bill can do that," he said. "But what I told my former colleagues ... is that we simply cannot allow differences over individual elements of this plan to prevent us from meeting our responsibility to solve a long-standing and urgent problem for the American people."

Obama insisted that "any fair reading" of the Senate bill shows that it meets the administration's criteria of lowering costs and expanding coverage while not adding to the federal deficit.

Democrats "may have to do what Mr. Lieberman wants" in order to pass the bill, Iowa Democratic Sen. Tom Harkin said.

Lieberman supported letting older workers buy into Medicare in 2000, when he was the Democratic vice presidential nominee, and as recently as September in comments to a Connecticut newspaper. Now, he said both Monday and Tuesday, the country has huge deficits -- as opposed to a budget surplus nine years ago -- and Medicare is poised to run out of money in 2017.

The Medicare buy-in was part of a package of provisions Reid announced last week as an alternative to a public option, which lacked enough support among Democrats to break a GOP filibuster.

Negotiated by a team of 10 Democratic senators -- five liberal and five moderate -- the compromise package had been hailed by Reid, Obama and others as an important step forward in the health care debate.

The package also would allow private insurers to offer nonprofit health coverage overseen by the government. But many senators have reserved judgment on the compromise proposal until the nonpartisan Congressional Budget Office provided its analysis of how much it costs.

The estimate had been expected to be completed as soon as Wednesday.

Another potential obstacle for Reid is moderate Democrat Ben Nelson of Nebraska, who said Sunday that he cannot support the Senate bill without tighter restrictions on federal funding for abortion.

Last week, the Senate defeated an amendment proposed by Nelson and two other senators that would adopt tougher language on abortion funding contained in the House health care bill.

A compromise on the abortion language is possible, said Nelson, one of the 10 Senate Democrats who negotiated in private last week.

If the Senate passes a health care bill, its version will have to be merged with the version the House of Representatives passed in November, which includes a public health insurance plan. The final bill would then need approval from both chambers before going to Obama to be signed into law.

Obama and Democratic leaders have said they want the bill completed this year. The Senate would need to finish its work this week to leave a realistic chance of meeting that schedule.

CNN's Dana Bash and Lisa Desjardins contributed to this report.