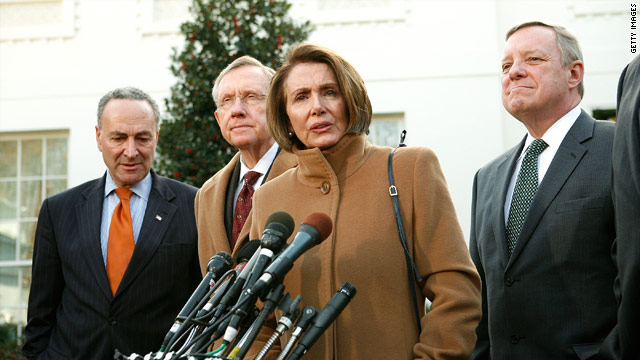 House Speaker Nancy Pelosi, here with Senate Democratic leaders, says, "We'll have a great bill when we put them together."
STORY HIGHLIGHTS

However, Senate Democrats agreed this week on a tentative deal to drop the public option from their health care bill in order to ensure the measure can pass the chamber.

Under a proposed alternative, the Senate bill would permit private insurers to offer nonprofit coverage overseen by the government and expand the Medicare program for senior citizens to allow people as young as 55 to buy in.

Pelosi, D-California, at her weekly news conference said she wants to get the Congressional Budget Office analysis of the Senate alternative before judging it, but she opened the door to a final bill without the public option.

"We in the House believe that the public option is the best way to keep insurance companies honest and also to increase competition," Pelosi said, adding: "If you have a better way, put it on the table."

With President Obama supporting the Senate alternative, Pelosi's openness to consider it represents a potential major step toward eventual passage of a health care bill by Congress.

If the Senate eventually passes a health care bill, it would be merged with the House version by a conference committee. Both chambers would have to approve the final bill before it could be sent to Obama to be signed into law.

The House and Senate bills are "probably 75 percent compatible," Pelosi said, adding that a final merged bill could win approval from both chambers before Christmas if the Senate completes its work by the end of next week and a conference committee can meet over the weekend of December 19-20.

Liberal Democrats call the public option the only way to truly reform the health care system by ensuring people have access to affordable coverage and providing low-cost competition to private insurers.

Republicans and some moderate Democrats consider the public option an unnecessary federal intrusion in health care that could lead to an eventual government takeover of the system.

The House narrowly passed its health care bill last month, and the Senate is in the second week of debate on its version. Senate Democrats need all 60 votes in their caucus to overcome a Republican filibuster to pass the bill, and some senators in the Democratic caucus have rejected the public option.

Democratic sources said the Senate deal reached Tuesday night includes proposals to replace the public option by creating a not-for-profit private insurance option overseen by the Office of Personnel Management, much like the current health plan for federal workers, along with the Medicare expansion.

Pelosi said she had yet to see details of the Senate plan. She listed essential elements for passing a health care bill, including making coverage more affordable for middle-class Americans, sustaining the solvency of the Medicare program for senior citizens while eliminating a gap in their prescription drug coverage, no deficit increase and holding insurance companies accountable.

"What I have said, as I've always said to my members, give the Senate room," Pelosi said, adding, "We will know a great deal more when the paper comes back from the Congressional Budget Office. But seeing their bill and our bill, I know one thing for sure -- we'll have a great bill when we put them together."

In particular, the idea of expanding Medicare to those 55 and older was appealing, Pelosi told reporters after the briefing.

Obama said Wednesday that the Senate agreement created "a new framework that I believe will help pave the way for final passage" of what he called historic health care reform legislation.

However, the American Medical Association and American Hospital Association both said on Wednesday they oppose the Medicare expansion provision in the Senate package.

In addition, two moderate Democratic senators who took part in the talks said the package must first be analyzed by the CBO before anyone can claim a final agreement.

"There is not specific compromise. Those were discussions," Sen. Mary Landrieu, D-Louisiana, told reporters.

Some liberals also had reservations. Sen. Russ Feingold of Wisconsin, one of 10 Democratic senators involved in talks on the deal, said he had concerns about the lack of a public option to ensure affordable coverage for those younger than 55 and therefore ineligible for the Medicare expansion.

Two senators who oppose a public option, moderate Republican Sen. Olympia Snowe of Maine and independent Sen. Joe Lieberman of Connecticut, said they were open to the nonprofit private alternative in the deal.

However, Lieberman and Snowe expressed concern over the idea of allowing Americans 55 or older to buy into Medicare.