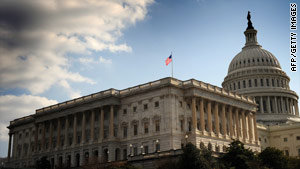 All 435 seats in the House and more than one-third in the Senate are up for grabs in November.
STORY HIGHLIGHTS
RELATED TOPICS

Washington (CNN) -- Eleven months before crucial midterm elections, a national poll indicates that the public is divided over whether the country would be better off with Democrats or Republicans controlling Congress.

According to a CNN/Opinion Research Corp. survey released Thursday, 40 percent of people questioned say the U.S. would be better off if Democrats ran Congress while 39 percent feel things would be better if Republicans took charge on Capitol Hill. The 1-point margin is a statistical tie.

Support for Democrats is down from a 10-point advantage in August and a 25-point margin in January.

"As the debate over health care continues, the Democrats may have lost the competitive advantage that they enjoyed earlier this year," CNN Polling Director Keating Holland said. "Since August, the number who support Democratic control of Congress has fallen farthest in the Northeast and the Pacific Rim -- two regions that have been Democratic strongholds for many years."

Nineteen percent of people questioned say that the country would be in the same condition regardless of which party controls Congress.

The poll also indicates Americans are split on which party they trust more to handle major changes to the country's health care system. Forty-three percent say they trust congressional Democrats more on health care reform, with four in 10 feeling Republicans would do a better job. The 3-point margin for Democrats is within the survey's sampling error.

According to the poll, a very large majority of Americans think that the health care bill that the U.S. Senate is considering would raise the federal deficit and raise their taxes, and while they think that the bill would help many families, only one in five think they would benefit personally if the bill becomes law.

"As a result, more than six in 10 say they oppose the Senate health care bill," Holland said. "Republicans obviously don't like the bill, but two-thirds of independents also say they are against it."

One of the main sticking points, a public option administered by the federal government that would compete with private insurers, wins support from 53 percent of the public.

The poll was conducted December 2-3, before Tuesday night's announcement of a deal negotiated by Senate Democrats that would drop the controversial government-run public insurance option for a package of health care alternatives.

The poll surveyed 1,041 adult Americans by telephone. The poll's overall sampling error is plus or minus 3 percentage points.