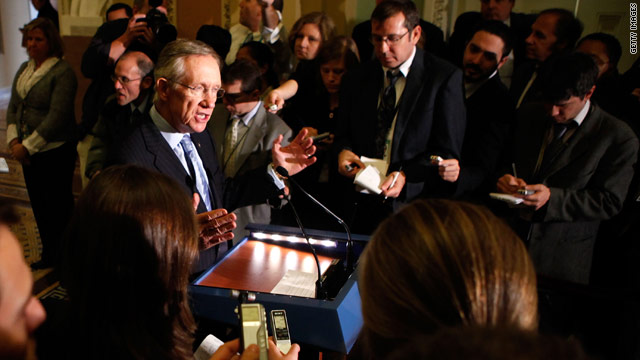 In remarks at a White House event, Obama said the agreement created "a new framework that I believe will help pave the way for final passage" of what he called historic health care reform legislation.

Earlier, White House spokesman Reid Cherlin said the senators "are making great progress, and we're pleased that they're working together to find common ground toward options that increase choice and competition."

However, the American Medical Association and American Hospital Association both told CNN Wednesday they oppose one part of the package that would allow people 55 and older to buy into the Medicare program for senior citizens.

In addition, two moderate Democratic senators who took part in the talks said the package must first be analyzed by the Congressional Budget Office before anyone can claim a final agreement.

"There is not specific compromise. Those were discussions," Sen. Mary Landrieu, D-Louisiana, said at a news conference, while Sen. Blanche Lincoln, D-Arkansas, said the CBO analysis -- called a score -- would determine the next steps.

"There are a lot of things on the table still, and until we hear back from CBO, it's going to be hard to see whatever I can support for sure," Lincoln said.

The public option provision has been the most divisive issue of the health care debate. Liberal Democrats call it the only way to truly reform the health care system by ensuring that people have access to affordable coverage and providing low-cost competition to private insurers.

Republicans and some moderate Democrats oppose the public option, making Senate passage of a bill that contains the plan unlikely. Obama has backed the public option so far, but his statement praising the Senate deal signaled his willingness to compromise on a bill that lacks the provision.

"It goes without saying it's been kind of a long journey," Reid said of the agreement reached by 10 senators who have met repeatedly since last week. "Tonight, we've overcome a real problem that we had. I think it's fair to say the debate at this stage has been portrayed as a very divisive one."

Without revealing any details, Reid said the negotiating senators had reached "a broad agreement" that "moves this bill way down the road."

Two Democratic sources said the deal includes proposals to replace the public option by creating a not-for-profit private insurance option overseen by the federal Office of Personnel Management, much like the current health plan for federal workers, and another allowing people 55 or older to buy into Medicare coverage that currently is available to those 65 or older.

I think there're some matters that have been advanced that are very good, there are others I have a concern about.
--Sen. Russ Feingold, D-Wisconsin
RELATED TOPICS

Liberals also signaled concerns. Sen. Russ Feingold of Wisconsin, one of 10 Democratic senators working on the deal, said in a statement released after Reid's announcement that he would not "support proposals that would replace the public option in the bill with a purely private approach."

Interviewed Wednesday, Feingold softened his stance, saying he needed to see full details of the alternatives and what they would cost.

"I think there're some matters that have been advanced that are very good, there are others I have a concern about," Feingold said. "I am not happy with the possibility there would not be a public option as a backup."

Feingold said his main concern was "whether this new system that people are talking about setting up would actually provide the kind of affordable health insurance" needed by people under age 55 without burdening taxpayers.

"That's why I think a public option as an alternative is the best way to go," Feingold said, adding that he had yet to decide on whether he could support a final health care bill lacking a public option.

Two senators who oppose a public option -- moderate Republican Olympia Snowe of Maine and independent Joe Lieberman of Connecticut -- said they were open to the nonprofit private alternative to a public option.

However, Lieberman and Snowe expressed concern about the idea of allowing Americans 55 or older to buy into Medicare.

The Medicare idea appeals to liberal Democrats seeking to expand health coverage to more Americans and could offset their opposition to a bill that lacks a full public option as originally proposed.

Some ideas discussed by the senators didn't make the final package, including a provision to expand the Medicaid program for low-income Americans to levels in the House health care bill.

The Democratic senators taking part in the talks were Charles Schumer of New York, and liberals Feingold, Jay Rockefeller of West Virginia, Tom Harkin of Iowa and Sherrod Brown of Ohio; along with moderates Thomas Carper of Delaware, Ben Nelson of Nebraska, Mark Pryor of Arkansas, Landrieu and Lincoln.