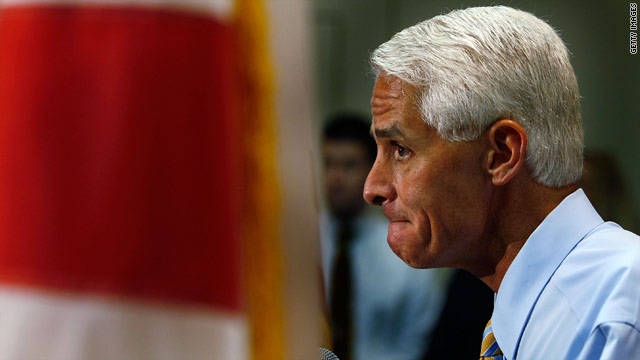 "As Marco Rubio speaks to Florida TaxWatch today, I would like to remind everyone that while his words might sound credible, his record certainly is not. From supporting the largest tax increase in Florida history to the hundreds of thousands Rubio has squandered in taxpayer dollars, there are good reasons Rubio has tried to hide his record," says Andrea Saul, the Crist campaign's communications director.

Crist is the popular first-term governor who's decided to run for the Senate next year rather than another term in Tallahassee. Mainstream Republicans have backed him.

Rubio is the darling of the right. Last month the conservative Club for Growth, an anti-tax organization, backed Rubio and went up with an ad slamming Crist. Days earlier, the Family Research Council, a powerful social conservative group, announced that its political action committee endorsed Rubio.

If the bitter battle looks familiar, it is.

Rewind just a couple months to the special election for New York's 23rd Congressional District. The House seat in the northern part of state opened up after nine-term moderate Republican John McHugh stepped down to become secretary of the Army.

Local GOP leaders in the district, which Republicans had represented for more than a century but that Barack Obama won in last year's presidential contest, picked state Assemblywoman Dede Scozzafava as their party's nominee in the contest because they felt her moderate views would appeal to centrist Republicans, independents and even some Democrats. National Republican Party organizations backed her as well.

But the move sparked a revolt among many conservatives, who were angry with what they called Scozzafava's liberal views on fiscal matters such as the federal stimulus and Wall Street bailout as well as cultural issues such as same-sex marriage and abortion. They backed Doug Hoffman, an accountant, who ran on the Conservative Party line.

Scozzafava suspended her campaign three days before last month's election after she nose-dived in public opinion polls following a flood of support and contributions for Hoffman by some top conservative names and organizations. The next day Scozzafava, endorsed Bill Owens, the Democrat in the race. The split among Republicans contributed to Owens' win.

The victory by the grass roots on the right over the moderates and the Republican Party structure in the New York race could foreshadow more fights ahead for the GOP as the party tries to find itself following election defeats in 2006 and 2008.

Besides Florida, Republican Senate primary battles in California, Kentucky, Ohio, Utah, New Hampshire and Illinois could potentially end up as bitter contests between the more moderate or establishment versus the more conservative insurgent wings of the party.

Stuart Rothenberg, editor and publisher of the nonpartisan Rothenberg Political Report, said, "The Republican Party's long had different wings on cultural issues, but that's a very different kind of fight than the GOP experienced in New York 23 and that the party's having in Florida right now, where economic issues, such as taxes and spending, are crucial to the bitterness.

"First New York 23, and now Florida, are unique in the level of animosity that's built up, not over social issues but over fiscal matters," Rothenberg added. "I don't think we're going to see that many GOP splits elsewhere, because on issues of taxes and spending, most Republicans are on the same side of the ball."

The Democratic Senatorial Campaign Committee has spent the past few months highlighting what it considers divisions among Republicans and is keeping track of what it calls the move to the right by more moderate GOP candidates.

"The fractured Republican Party that resulted in Democrats picking up a House seat that they hadn't held for decades was just the tip of the iceberg," said DSCC communications director Eric Schultz. "We see the same deep-rooted divisions in the Republican Party all over the country, and several Republican candidates who once fancied themselves as moderates are now moving rightward as fast as they can.

"Republican Senate candidates like Rob Simmons, Mark Kirk, Carly Fiorina and Kelly Ayotte, all of whom are running in very blue states, are tacking right because they are mortified of the Tea Party activists and the extreme right wing of the party."

"There is a civil war going on right now, but it's in the Democratic Party, as we're watching them implode on health care and Afghanistan," said National Republican Senatorial Committee communications director Brian Walsh. "The reality on our side is that with each passing month, Republicans are better positioned to win back Senate seats and restore checks and balances in Washington next year."

One thing's for sure -- the New York congressional race was unique because the intra-party GOP split occurred in a general election. The next battles will take place in the primaries.

"Even if you have divisions in the primaries, you'll most likely have time for those divisions to heal," Rothenberg said. "New York 23 was a very rare case."