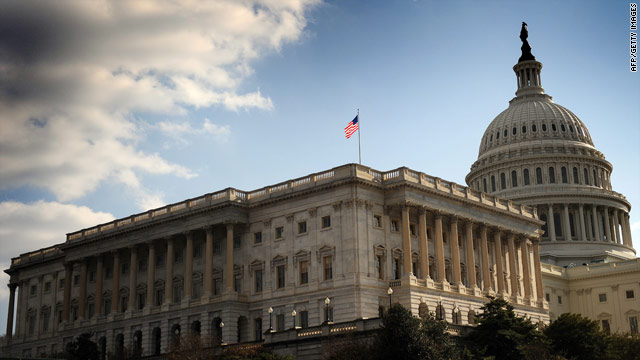 The Senate is expected to hold a procedural vote Saturday night.
STORY HIGHLIGHTS

(CNN) -- If Senate Majority Leader Harry Reid has his way, his chamber will vote Saturday to proceed with debate on its version of the health care bill.

If he's successful, Senate Democrats can breathe a sigh of a relief momentarily -- but it's too early for them to celebrate. The road to final passage of health care legislation is still long and bumpy.

Reid needs 60 votes for the procedural vote this weekend, another 60 votes to close debate -- which could last for weeks -- but only 51 for final passage. Reid has said he hopes to vote on the final bill before the end of the year. President Obama's original deadline for Congress was last August.

The first hurdle appeared to be reached Saturday when Sen. Blanche Lincoln of Arkansas said she will support bringing the Senate health care reform bill to the floor for debate, giving Democrats the 60 votes needed to prevent a Republican filibuster.

The House passed its version of health care reform two weeks ago, with 220 representatives voting in favor and 215 against. Thirty-nine Democrats opposed the plan and one Republican supported it.

But it's a tougher fight for Democrats in the Senate, where it is much easier for the GOP minority to stifle the will of the Democratic majority.

If the Senate does pass a bill, a congressional conference committee will need to merge the House and Senate proposals into a consensus version requiring final approval from each chamber before moving to Obama's desk to be signed into law.

Already, Democratic leaders in the House and Senate have reached agreement on a broad range of changes that could affect every American's coverage.

They have also agreed to create health insurance exchanges designed to make it easier for small businesses, self-employed and the unemployed to pool resources and purchase less expensive coverage. Both the House plan and a plan approved by the Senate Finance Committee would limit total out-of-pocket expenses and prevent insurance companies from denying coverage for pre-existing conditions.

Insurers would be barred from charging higher premiums based on a person's gender or medical history.

Democratic leaders in both chambers agree on establishing nonprofit health care cooperatives and stripping insurance companies of an antitrust exemption that has been in place since the end of World War II.

What are the major differences?

For starters, the House bill is more expansive -- and hence expensive -- than the Senate bill. The House bill, projected to guarantee coverage for 96 percent of Americans, will cost more than $1 trillion over the next 10 years, according to the nonpartisan Congressional Budget Office.

The Senate bill, estimated to cover 94 percent of Americans, comes with an $848 billion price tag, according to the CBO.

The Senate measure also trims entitlement programs such as Medicare and Medicaid.

The bill also includes a range of tax increases and new fees. The Medicare payroll tax on individuals earning $200,000 a year and couples earning $250,000 a year would increase by a half-percentage point, from the current 1.45 percent to 1.95 percent.

In addition, insurers providing costly health coverage -- known as "Cadillac" plans -- would face a 40 percent tax on premiums of greater than $8,500 for individuals and $23,000 for families. The Senate bill also includes a 5 percent tax on the cost of elective cosmetic surgery, as well as new fees for insurers and pharmaceutical manufacturers. The revenue from all the taxes and fees is projected to exceed $200 billion.

Proponents of the tax on high-end plans argue it's one of the most effective ways to curb medical inflation. A large number of House Democrats are adamantly opposed to taxing such policies, arguing that such a move would hurt union members who traded higher salaries for more generous benefits.

Another key sticking point: the dispute over a government-run public option. Both plans include a public option, but the Senate bill gives individual states until 2014 to decide whether they want to opt out.

Under both plans, individuals would be required to purchase coverage, but the House bill includes more stringent penalties for most of those who fail to comply. The Senate plan would require individuals to buy health insurance, with a fine for noncompliance of $95 in the first year that would escalate to $750 by 2016. Parents would be responsible for providing coverage for children up to age 18.

The House bill would impose a fine of up to 2.5 percent of an individual's income.

Employers also face a much stricter mandate under the House legislation, which would require companies with a payroll of more than $500,000 to provide insurance or pay a penalty of up to 8 percent of their payroll.

The Senate bill would require companies with more than 50 employees to pay a fee of up to $750 per worker if its employees rely on government subsidies to purchase coverage.

Abortion also promises to remain a major obstacle for both chambers.

The Senate plan would allow abortion coverage through privately funded premiums in both a government-run public insurance option and private plans purchased with the assistance of government subsidies.

The more conservative House of Representatives plan, in contrast, would bar abortion coverage under both the public option and private policies purchased with government subsidies. House Democratic leaders opposed the measure, but added it to win critical support from anti-abortion members. Both plans would allow for exceptions in cases of rape, incest or when the life of the mother is in danger.