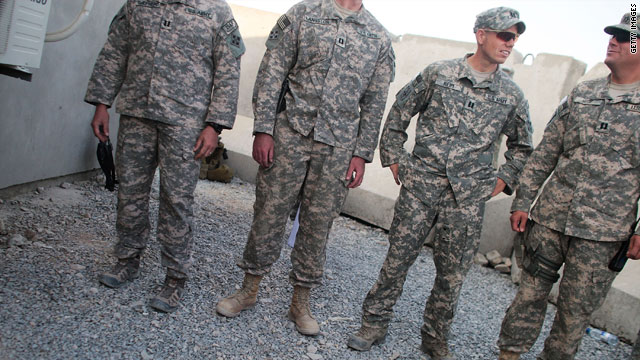 If more troops are sent to Afghanistan, the deployment would be phased over time.
STORY HIGHLIGHTS
RELATED TOPICS

Washington (CNN) -- If President Obama decides to send the 40,000 additional forces to Afghanistan as requested by Gen. Stanley McChrystal, a rough estimate by the Pentagon projects the cost could be an additional $20 billion a year, according to a senior Pentagon official.

The official said the Defense Department comptrollers office has told Congress that based on rough estimates, the total cost of keeping an individual service member in the war zone is now about $500,000 a year.

That includes the costs of personnel operations and maintenance costs, some equipment and hazardous duty pay.

The actual costs could be higher, because the estimate does not include the cost of constructing additional facilities, providing support forces such as military intelligence assets that may be based outside Afghanistan or replacing damaged weapons or equipment. The official emphasized that until there is a formal troop plan, the costs are just estimated.

The official would not be identified because the estimates are not official.

The ongoing review of the strategy for Afghanistan continued Friday, with Obama meeting with Defense Secretary Robert Gates; Adm. Michael Mullen, the chairman of the Joint Chiefs of Staff; and the heads of the four military services.

The heads of the Army and Marines, who provide the bulk of troops for the war, have expressed concern that if they send a large number of additional troops, they will have to cut down on the time troops spend in between deployments, known as "dwell time."

Marines have only about 8,000 troops they can add without impinging on dwell time. The Army has about 12 brigades, or approximately 48,000 soldiers, that are not deployed or committed to deploy.

Regardless of the number of troops being sent, a deployment will be phased over time because of the lack of facilities in the country to house and support a large deployment, the official said.

McChrystal's plan calls for sending a majority of the forces he is requesting to the south, especially to reinforce Kandahar and Helmand provinces, and the region around Kabul, several military and Pentagon sources said. McChrystal also intends to reserve a number of forces for training Afghan forces, officials said.

But one official noted that if that plan is put into effect, additional forces would be needed to be sent to areas that the Taliban might then flee, such as the northern region.