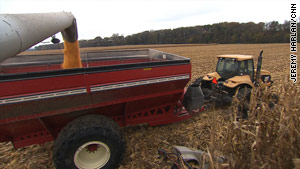 Corn is harvested on the Neale Farm in Fort Calhoun, Nebraska.

Fort Calhoun, Nebraska (CNN) -- Neale Shaner views the ups and downs of the economy through the lessons of a life working the family farm: "One thing's certain, and that's uncertainty."

At the moment though, he is quick to note that things are relatively good, drawing a nod from his son, Jeff.

"Compared to seven, eight years ago, things are pretty good," Jeff Shaner said over coffee earlier this week. "They're not as good as they were last year, but they are still comparatively better and good."

North Dakota, South Dakota and Nebraska, for example, are the only three states with unemployment below 5 percent.

"The ag production economy has not been as affected as dramatically as the rest of the economy," Neale Shaner said. "You know, the reverse of that is we struggle in good times."

The Shaner family owns 40 acres but farms 5,000, leasing most of the land on which they grow corn, soybeans and some alfalfa. Jeff took over the day to day operations a few years back, and his father, "semi retired" as he puts it, helps out a few days a week.

Watching their 12-row combine harvest the corn is a sight to behold, methodically scooping ears from the fields and dramatically increasing productivity. This corn won't end up on a dinner table but instead at a giant Cargill plant just up the road, where it is processed into ethanol and several corn byproducts.

In Washington, ethanol is a source of controversy, with many lawmakers arguing it is an industry unfairly propped up by generous federal subsidies. To Nebraska, however, it is the direct source of roughly 1,000 jobs at ethanol production plants across the state, many of them located in small towns where those 40 to 50 plant jobs are the local gold standard.

Jeff Shaner said the impact on corn prices from ethanol adds 10 percent to 15 percent to his bottom line, and without a doubt contributed to Nebraska's comparatively low unemployment rate.

"Absolutely. Whether it be truck drivers, machine shops, people that are at the plant, maintaining the plant, hauling the garbage away from the plant," is Shaner's partial list of the economic impact. "It is a tremendous ripple effect."

A recent uptick in oil prices has improved the bottom line for ethanol producers after a tough stretch.

Advanced BioEnergy is a Minnesota-based company that employs 45 people at an ethanol plan in Fairmont, not too far from the state capital of Lincoln.

It marks two years of production this Sunday.

"We went through 12 to 18 pretty challenging months in the ethanol industry," ABE plant manager Grant Johanson told us during a tour this week. "It's greatly improved."

The corn haulers visit throughout the day, coming to a stop over giant grates and then unloading their golden cargo. It is carried by belts into the adjacent production facility, which includes seven massive 800,000 gallon tanks where the mash mixes for 50 hours. From there it is distilled and separated, the alcohol broken away from the solids and the water.

ABE Fairmont produces 300,000 gallons of ethanol a day, shipping it by rail car to facilities where it is blended into gasoline. Giant golden mounds in another warehouse are a prized byproduct; distilled grain used for cattle feed.

Forty-five jobs might not seem like much, but in a county of little more than 6,000 they are prized opportunities, and the constant flow of trucks bringing corn in and taking the distilled grain out illustrated the add-on benefit to the local economy.

"There are several things that have impacted the local economy," Johanson said. "Providing this large tax base, for our school systems here in Fillmore County and our county's budget every year. That's a good shot in the arm for them."

Just how long corn-based ethanol will remain a significant slice of the U.S. energy equation is a constant topic of debate and interest here.

"I think it is going to be a bridge for about 20 years probably," said agricultural economist Dick Perrin of the University of Nebraska. "It's not a big fuel but I think it is an important fuel in this bridging period until we find other kinds of technologies that will give us the energy supply we need. So I think investment people who are investing based on the ethanol industry are in pretty good shape for the next 20 years. But then beyond that we will have to think about something else."

In addition to where ethanol fits in the U.S. energy mix, there are some who suggest using a food for fuel is a poor moral and long-term choice. Perrin, noting giant gains in the productivity of farming corn -- higher yields because of technological improvements -- said of the food argument: "In the long run I think it is a very serious issue. In the short run, I don't think it has really been an issue at all."

At the moment, the Shaners are enjoying the relative stability that sales for ethanol have brought to their lives.

But Jeff Shaner is well aware the corn-based ethanol demand could dry up down the road, and he vows to be ready.

"The food versus fuel argument is, you know, not my decision," Jeff Shaner told us. "It is the market decision. If in five years the market is telling me to go with switchgrass, we'll go with switchgrass. ... Whether if be corn or soybeans or whatever the case may be, I just hope I am flexible enough to realize it and change what needs to be done in order to be successful."