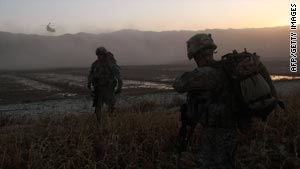 (CNN) -- U.S. President Barack Obama says the war in Afghanistan isn't going to end up like Vietnam. A majority of Americans don't agree and don't want to get in any deeper, but even they don't like the alternative.

"Younger Americans, who probably learned about the Vietnam war only through textbooks don't necessarily see quite the same parallels," said CNN polling director Keating Holland. "But for older Americans they're really starting to get a little bit of a sense of deja vu."

Our newest CNN Opinion Research poll finds that a majority of Americans oppose the war in Afghanistan and think it's turning into another Vietnam, the most divisive and painful defeat in modern American history.

Obama has been struggling for weeks to set a new strategy for Afghanistan and is trying to decide whether to deploy more troops. A majority of Americans are opposed to that too.

It's easy to be reminded of the way a generation of GIs who went to Southeast Asia, starting with a handful of advisers in the 1950s, rising to more than 500,000 troops by 1968.

And he resists the comparison between the two conflicts.

"Each historical moment is different. You never step in the same river twice," Obama said in an interview last month. "And so Afghanistan is not Vietnam."

The most important difference may be that the current war isn't being fought against the perceived threat of Communism half a world away, but as a result of the deadly 9/11 attacks on the U.S. itself.

That's why despite all their doubts, Americans want the president to keep fighting.

The poll we did that found a majority opposing the war in Afghanistan found an even bigger majority who believe it's necessary to keep the military there to prevent more terror attacks on the U.S.

The best explanation may be this: Americans don't want to send more troops into Afghanistan and they don't want to keep fighting there. But they are afraid of what will happen if they leave the battlefield behind.