(CNN) -- The top U.S. commander in Afghanistan, Gen. Stanley McChrystal, plans to address NATO defense ministers Friday about the next steps for the military strategy. 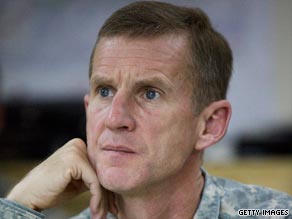 The NATO meeting in Bratislava, Slovakia, comes as the United States wraps up a review of its own military strategy in Afghanistan.

"As has been said in Washington, I think the analytical phase is coming to an end and probably over the next two or three weeks we're going to be considering specific options and teeing them up for decision by the president," U.S. Defense Secretary Robert Gates said Friday after the morning NATO session.

McChrystal is pushing Washington to send 40,000 more U.S. troops to Afghanistan amid skepticism from some of President Barack Obama's top advisers.

The general planned to address the NATO defense ministers at a Friday afternoon "working lunch" that will focus on the Afghanistan war strategy, Gates said. Afghan Defense Minister Abdul Rahim Wardak will also be present, he noted.

A main focus of the meeting is how to transition power of security to Afghan forces. But that is still a long way off, NATO Secretary-General Anders Fogh Rasmussen said Friday.

"We need to start thinking about and planning towards progressively handing over lead responsibility to the Afghan army and the Afghan police," Rasmussen said.

"Now let me be clear: We have not agreed to start handing over the lead. The conditions are not yet right. The Afghan security forces are not yet strong enough."

He stressed that when the transition happens, it "doesn't mean NATO forces leave. It means they go into a supporting role."

NATO's International Security Assistance Force is made up of more than 71,000 forces from 43 contributing nations, including more than 34,000 from the United States.

All About Afghanistan • NATO