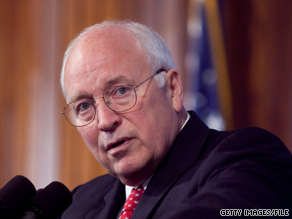 Former Vice President Dick Cheney forcefully reasserts himself in the center of the national security debate.

In a hard-hitting, wide-ranging speech Wednesday for a conservative gathering, Cheney targeted the administration's decision-making process on how to proceed in Afghanistan, saying Obama has failed to give troops on the ground a clear mission or defined goals and appeared "afraid to make a decision."

"The White House must stop dithering while America's armed forces are in danger," Cheney said at the Center for Security Policy. "Make no mistake, signals of indecision out of Washington hurt our allies and embolden our adversaries."

In responding to Cheney's attack, White House press secretary Robert GIbbs on Thursday got in a jab of his own.

"What Vice President Cheney calls 'dithering,' President Obama calls his solemn responsibility to the men and women in uniform and to the American public," Gibbs said. "I think we've all seen what happens when someone doesn't take that responsibility seriously." Read more about Gibbs' response to Cheney attack

Speaker of the House Nancy Pelosi responded to Cheney in kind.

"I don't think it's very constructive for the vice president to say that -- he's forgotten whose administration made matters worse in Afghanistan by their neglect."

Cheney also targeted White House Chief of Staff Rahm Emanuel, who suggested on CNN's "State of the Union With John King" on Sunday the Bush administration failed to assess conditions in Afghanistan adequately before committing troops there.

"Now they seem to be pulling back and blaming others for their failure to implement the strategy they embraced," Cheney said in reference to Emanuel's comments. "It's time for President Obama to do what it takes to win a war he has repeatedly and rightly called a war of necessity."

Cheney also vigorously took the president to task for his decision last month to abandon the Bush-era plan for a missile defense system in Europe that would have placed 10 interceptor missiles designed to protect against the possibility of a nuclear Iran in Poland and the Czech Republic.

"President Obama's cancellation of America's agreements with the Polish and Czech governments was a serious blow to the hopes and aspirations of millions of Europeans," Cheney said. "These are faithful friends and NATO allies, and they deserve better. ... Our friends throughout the world are watching and wondering whether America will abandon them as well."

The comments appear to mark a shift for Cheney, who, after a series of interviews and speeches last spring in which he declared Obama had put the country at an elevated level of risk, has remained relatively quiet over the last few months as he works to complete his memoirs set for release next year.

Instead, Cheney's eldest daughter Liz has become the most visible member of the family, launching a group last week aimed at organizing conservative opposition to the Obama administration's foreign policy approach.

The former vice president forcefully reasserted himself in the center of the national security debate Wednesday, declaring, "There will always be plenty of us willing to stand up for the polices that have kept this country safe."

Cheney vigorously defended what he called the Bush administration's "enhanced interrogation techniques," which Obama has denounced as ineffective and a potential incentive for terrorists.

"Such accusations are a libel against dedicated professionals who acted honorably and well, in our country's name and in our country's cause," Cheney said. "What's more, to completely rule out enhanced interrogation in the future, in favor of half-measures, is unwise in the extreme. In the fight against terrorism, there is no middle ground, and half-measures keep you half-exposed."

Cheney appeared most enraged with the Justice Department's announcement it is considering leveling charges against CIA officials who engaged in the "enhanced interrogation" tactics.

"We cannot protect this country by putting politics over security and turning the guns on our own guys," he said to the rousing crowd.

The White House had no immediate response to Cheney's comments.