Avlon: Extremism in danger of acceptance

Editor's note: John Avlon is the author of "Independent Nation: How Centrists Can Change American Politics" and the upcoming "Attack of the Wingnuts: How the Lunatic Fringe is Hijacking America." Avlon writes a weekly column for The Daily Beast. Previously, he was chief speechwriter for New York Mayor Rudolph Giuliani and was a columnist and associate editor for The New York Sun. 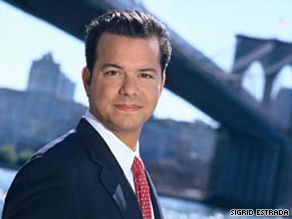 Politics is an ideological bloodsport between not just right and left, but good and evil, says John Avlon.

NEW YORK (CNN) -- We are witnessing a wingnut war break out in American politics, organized on the Internet and fought out in airwaves and in town halls, wingnuts firing their shots from the outer reaches and strafing the common sense center.

Look beyond the sober skeptics and the principled opposition to President Obama, and you'll find an ugly fringe festival cultivating the wounds left by the 2008 campaign and pouring gasoline on the embers of the culture wars.

As the two parties become more ideologically polarized, the fringe is now blurring with the base while the moderate majority feels increasingly politically homeless.

A culture of extremism is in danger of gaining acceptance.

In a CNN.com profile of the Tea Party Express, lead speaker Deborah Johns is quoted as saying, "The men and women in our military didn't fight and die for this country for a communist in the White House!" while the Louisville, Kentucky, crowd chants "U-S-A, U-S-A!" This ugly scene was unremarked on -- hopefully because the insanity spoke for itself.

Since I started the "Wingnut of the Week" segment on CNN's "American Morning," each week has given us multiple contenders for the ring of dishonor from the far right and far left. But lately, it has gotten improbably worse.

In the last week, Arizona Rep. Trent Franks called President Obama "an enemy of humanity" in his speech at the "How to Take Back America Conference" (where one workshop was called "How to Recognize Living under Nazis & Communists").

That's not all: A former White House speechwriter posted a call on the conservative Web site Newsmax for the president to be deposed in a military coup. It was quickly taken down, but the damage was done.

The civility is dying in part because the permanent campaign pursued by incumbent presidents to sell the American people on their agenda is being met with a new innovation: the permanent opposition campaign.

There is no presidential honeymoon and no national unity in this new view.

There is no assumption of goodwill or responsible governance from the president of a different party.

Opposition is now "resistance" and politics is an ideological blood sport between not just right and left, but good and evil. And so any president with an opposing view is an enemy -- and the ugliness emerges.

President Bush was subjected to many of these same attacks from the far left -- "Bush = Hitler" signs and being called a domestic terrorist. But there is a more widespread fury and fervor being directed at Obama in far less time.

There is a recipe that keeps being repeated -- a wingnut claim is posted on a fringe Web site and gets passed around. It gets reiterated on talk radio, and then talk radio comments bubble up to the grassroots with signs at protests echoing the claims.

Eventually some far-right or far-left elected official repeats, playing to the base while venting their spleen. It makes news not only because of the statements' outrageousness, but because it crystallizes the crazy that is going on in our politics.

Two broad factors are driving this uptick of insanity and incivility, beyond Obama himself and whatever policies he proposes: the economy and the Internet.

History shows that demagogues rise when the economy turns south.

They specialize in blaming others for the troubles with wild accusations. It's a time-honored formulation, a powerful narcotic for the nervous and dispossessed, with violent side effects.

During the Great Depression, populist anger was directed at big business.

When conservative populism reared its head in the late 1960s, anger shifted toward big government.

But now we've got both -- anger at big business and big government. It's a perfect political storm, primed for a return to pitchfork politics.

The Internet has made it easier for wingnuts to congregate across state lines, to form an army from the fringes.

This has increased their influence and amplified their voice, making them, in effect, the loudest lobbying block.

No longer are they just cranks to be tolerated -- the fringe is blurring with the base, creating leverage on the party leadership.

Finally, there is an additional factor that has enabled this explosion of hyper-partisanship -- the rigged system of redistricting that has reduced the number of competitive congressional districts around the country.

This has encouraged play-to-the-base politics and discouraged the virtues of moderation and constructive compromise.

Amid the declining civility, some people are asking if the middle ground is gone for good. It's not -- it's just under attack. Although wingnuts attract a lot of media coverage, polls show that most Americans don't share their extreme views.

The wingnuts are still the fringe and we have seen their kind before.

We've seen them in the Know-Nothing Party of the 1850s, which was anti-immigrant and anti-Catholic while waving the American flag, ultimately dubbing itself "the American Party."

Teddy Roosevelt coined the term 'lunatic fringe' to describe the anarchist wingnuts of his day.

The wingnuts surfaced in the paranoid anti-communism of the John Birch Society and when far-left liberals and union leaders got all misty-eyed talking about "Uncle Joe" Stalin.

In the '60s, there were White Citizens Councils in the South and violence from far-left radical groups like the Black Panthers.

All these were influential in their time and capable of intimidation. Each time, we beat them by standing up and calling out their paranoia, hate and political excess.

They shrunk back into the shadows when confronted by the common sense and common decency of the moderate majority of the American people.

There are those who believe that highlighting wingnuts only gives them more power, because they thrive on the oxygen of attention.

But I believe sunlight is the best disinfectant. Wingnuts' influence on hyper-partisan politics proliferates in the dark.

That's when politicians can play to their fears, seek their support, and benefit from the paranoia they create, while maintaining plausible deniability. By naming the problem and calling them out, we can hold them accountable and help define the terms of the debate.

The wingnuts' increasing influence in our politics should be a wake-up call.

It is a challenge to the idea that what unites us is greater than what divides us as Americans.

We need to keep an eye on their efforts, remembering something President Eisenhower said a half-century ago: "The middle of the road is all the usable surface. The extremes of left and right are in the gutters."