Editor's note: A nationally syndicated columnist, Roland S. Martin is the author of the forthcoming book, "The First: President Barack Obama's Road to the White House as originally reported by Roland S. Martin" and of two other books, "Listening to the Spirit Within: 50 Perspectives on Faith" and "Speak, Brother! A Black Man's View of America." Visit his Web site for more information. 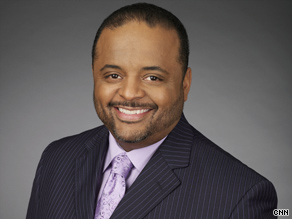 Roland Martin says conservative critics are wrong to chortle at the defeat of the Chicago Olympic bid.

(CNN) -- Whenever President Obama has traveled overseas and offered pointed and direct assessments of the United States, some of them critical, Republicans have ripped him for criticizing America, saying a president should always defend the United States.

So I want to hear the explanation by these so-called patriots of their giddy behavior over the United States losing the 2016 Olympic Games.

Republicans want to spin the decision as a massive loss by President Obama and the Democrats who have always controlled Chicago politics.

"Hahahahaha," wrote Erick Erickson on the conservative "RedState" blog, "I thought the world would love us more now that Bush was gone."

What the critics don't see is that Obama's loss on the Olympics is America's loss. Any red-blooded American who loves to see the American flag raised and the national anthem played when one of our own wins a gold medal should blast the Republicans' giddiness over the loss.

I can recall crying along with millions of Americans when our hockey team beat the Russians and won the hockey gold in 1980. Where were those games? Lake Placid, New York. Euphoria spread all across the nation, not only because we beat the mighty Russians, but also because it took place on American soil.

When Carl Lewis and Mary Lou Retton dominated the 1984 Olympic Games, we all beamed with pride because they represented the United States on American soil in Los Angeles, California.

And when Michael Johnson stormed around the track to obliterate the world record in the 200-meter dash (since broken by Jamaica's Usain Bolt), we relished the win as he took a victory lap around the stadium in Atlanta, Georgia.

Americans love home field advantage, and we always desire to show the rest of the world what we are made of.

I don't care if Republicans want to rip President Obama over going to Copenhagen, Denmark, to pitch for the games. This isn't about politics. It's not about ideology. This is about America. OUR pride. Our chance to shine. Our loss of the games.

So, to all the critics happy about us losing the 2016 games, turn in your flag lapel pins and stop boasting of being so patriotic. When an American city loses, like New York did in the the last go-round, we all lose. And all you critics are on the same level as the America haters all across the world.

You should be shouted down for not backing your own country. The next time any of you bang out a press release about "Buy American" or "Support our troops," remember this moment when your cynical, callous and small-minded brains happily rejoiced when America lost the 2016 Olympic Games.

All About 2016 Summer Olympics • Barack Obama