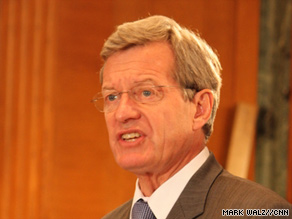 Senate Finance Committee chairman Max Baucus says the bill "will improve the lives of every American."

The Finance Committee was the last congressional panel to consider a health care reform bill. It finished its work at 2:18 a.m. and plans to vote next week, after the bill's final language has been made public and the Congressional Budget Office has provided final cost figures.

Unlike several health care reform proposals championed by House Democrats, the version that emerged from the Senate Finance Committee does not contain the public option -- it would not create a government program to provide health insurance to all Americans.

President Obama hailed the committee's work as "the culmination of tireless efforts" by it and four other committees and members of Congress on health care reform.

"As a result of this work, we are now closer than ever before to finally passing reform that will offer security to those who have coverage and affordable insurance to those who don't," he said in a White House statement.

Although the health care debate has often been contentious, the committee's work ended with more of a whimper than a bang.

"For the most part this was conducted in a very gentlemanly and ladylike way and I want to thank you for that," Republican Sen. Charles Grassley of Iowa said to committee chairman Sen. Max Baucus, D-Montana.

Baucus praised the Finance Committee proposal as one "that will improve the lives of every American ... in a fiscally responsible way." He said it would significantly expand health coverage while reducing the federal deficit, protecting Medicare benefits for seniors and lowering taxes for more than 42 million Americans.

"We are offering a fiscally responsible bill that takes good ideas from both sides of the aisle," he said in a statement. "Together, we will deliver a bill that can pass the Senate."

Grassley, however, has said he fears the legislation will eventually lead to the government taking over the health care system.

"We have a long way to go," Obama said in his statement, "but I am confident that as we move forward, we will continue to engage with each other as productively as the members of the Finance Committee, and will get reform passed this year."