COPENHAGEN, Denmark (CNN) -- The battle to host the 2016 Summer Olympic Games appears to be heating up between Chicago, Illinois, and Rio de Janeiro, Brazil, two sources close to the process said Thursday. 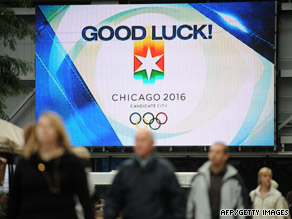 This screen in Chicago's Daley Plaza will show the announcement of the winning city live on Friday.

The revelation came after a day of furious behind-the-scenes lobbying of International Olympic Committee members by American first lady Michelle Obama and famed talk show host Oprah Winfrey, who both hail from Chicago.

Madrid, Spain, and Tokyo, Japan, are also in the running. But the sources said Chicago and Rio have emerged as the clear front-runners and are in a neck-and-neck battle ahead of President Obama's arrival early Friday for a presentation to the IOC's 106 members, 97 of whom will be voting later in the day to decide which city will win the games.

After a flurry of private conversations among IOC officials in Copenhagen, one of the sources close to the process -- an American -- said bluntly that it's "close as hell" between the U.S. and Brazilian cities.

Watch how people are betting on which city will win »

Both Obama and Brazilian President Luiz Inacio Lula da Silva plan to make personal appeals to the voters on behalf of their cities Friday morning.

In a sign of just how ferocious the lobbying is, King Juan Carlos of Spain and new Japanese Prime Minister Yukio Hatoyama are also making personal pitches to the IOC members.

There has been widespread speculation that Obama is flying to Copenhagen for a four-hour lobbying mission only because the White House has gotten a private heads-up that Chicago will win and that he should come to claim victory. But the sources close to the process insisted that the voting has not been pre-cooked, meaning Obama is swooping in at some political risk, because it is unclear whether the U.S. bid will be successful.

Chicago Mayor Richard Daley, who is in Copenhagen, has been privately giving the White House positive progress reports about what he's hearing from IOC members, suggesting that the U.S. bid is in good shape, according to the sources.

But the sources cautioned that Obama and top aides are only cautiously optimistic and want to wait until the voting before they contemplate any celebrations.