Public option: 'Nothing is ever dead on Capitol Hill'

(CNN) -- As lawmakers huddled this summer to put together the framework for health care legislation, it quickly became evident that the battle over President Obama's top priority would be neither quick nor easy. 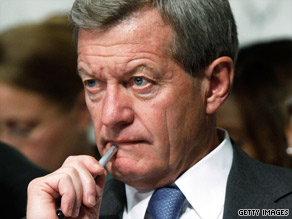 Sen. Max Baucus says he likes the idea of a public option, but he doesn't think he can get the votes with it.

After months of debate and missed deadlines, the public option has emerged as the main sticking point.

From the beginning, some Democrats said they wouldn't pass a bill without a government-sponsored, public option, while other Democrats and most Republicans said they'd say no to any plan that included one.

This week, the Senate Finance Committee -- the last congressional panel to consider health care legislation before debate begins in the full House and Senate -- shot down two amendments to include a public health insurance option.

Committee chairman Max Baucus, D-Montana, said that while he liked the idea of a public option, he knew a bill that included the provision would be a death sentence for health care reform.

But Democratic Sens. Jay Rockefeller of West Virginia and Charles Schumer of New York, who sponsored the public option amendments, both indicated that they don't think the debate about the public option is over.

Despite his proposal being voted down, Schumer said Tuesday, "Today the odds went up that there'll be a public option in the bill."

There's been a lot of focus on the plan in the Senate Finance Committee, because it's considered the closest thing to a compromise proposal. It's the result of months of negotiations between Baucus and five other committee members -- two fellow Democrats and three Republicans.

Still, none of the three Republicans in the "Gang of Six" negotiators has backed the proposal yet.

But Baucus' plan is just one of several. The Democratic proposals passed by another Senate committee and three House committees all include the public insurance option.

Republican Sen. Olympia Snowe of Maine, however, has put forth an amendment to the Senate Finance Committee plan that could serve as a public option middle ground. She's proposing a "trigger" mechanism that would create a public option in the future if specific thresholds for expanded coverage and lower costs are not met. The trigger has yet to be included in any proposal.

In the House, Speaker Nancy Pelosi, D-California, called the trigger idea "an excuse for not doing anything."

"And so one thing I know for sure, at end of the day, a public option is the strongest lever that we can use to get the best possible outcome for America's working families," she said last week. Asked if the provision would definitely be in the House bill, Pelosi replied, "Yes."

Republicans in the House say they've been shut out of the debate.

"The president hasn't had the Republican leadership down to the White House since late April or early May. I sent the president a letter back in May outlining some of the things we'd like to do in health care, and asked him for a meeting. And I got a nice polite letter back that said, basically, 'Thank you, but we'll see you at the end of the process,' " House Minority Leader John Boehner told National Public Radio.

David Gergen, a senior political analyst for CNN, said it's clear that Democrats aren't going to get the robust, government-sponsored option they had hoped for.

"I think the real question now is whether they can come up some sort of watered-down proposal that will get them partway there and they may get enough Democrats to get it passed. But I think that is going to be tough going," he said.

But Candy Crowley, CNN's senior political correspondent, pointed out that "nothing is ever dead on Capitol Hill."

"It just doesn't happen. However, it does happen for a session or for a year. I think, if you look at this, they will have something that they will say is a public option or it comes close to it. ... They have a way to take the language and make it kind of work so it doesn't look like they gave up on it."

Senate Majority Leader Harry Reid, D-Nevada, announced Wednesday that the Senate would no longer take a weeklong recess for the Columbus Day holiday. Instead, the Senate will take the Monday and Friday off.

"With all the things going on here, it just would not be right for us to take that week off," he said. "I think we should be able to start our health care work that week here on the Senate floor."