Commentary: Why I fist-bumped the Dalai Lama

By Myron Lowery
Special to CNN 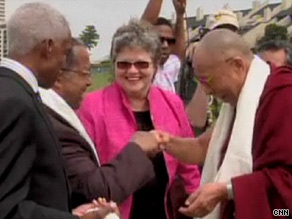 Memphis Mayor Myron Lowery fist bumps the Dalai Lama on his arrival in the Tennessee city.

It seemed like a good idea at the time. And with hindsight being 20/20; it still does.

How often do you get to meet an international figure as captivating as the Dalai Lama? I wanted to make an impression, and break the ice, in my Southern hospitality sort of way.

So enter the lyric from the song and the fist bump now heard round the world.

I had been told by his representatives that the Dalai Lama had a wonderful sense of humor, and would enjoy the exchange. Indeed, he did. His Holiness laughed, returned the gesture, and gave me his blessings.

And in our brief time together, I saw in his eyes the sparkle of kindness, love and good humor.

It's unfortunate that not everyone could allow themselves to enjoy the moment, as we did.

Barely an hour passed before reporters began calling to say my fist bump with the Dalai Lama was "disrespectful," unusual and perhaps inappropriate. Why would I do that, they asked?

Well to answer that, I would have to go back a couple of weeks or so.

One of my assistants in the mayor's office began feeling ill. After a couple of days off work, she was diagnosed with the H1N1 flu. She sits 10 feet away from me. The swine flu story was hitting close to home in a major way. As the leader of a major city, I had to step forward and deal with fears about a virus that has never been known to man.

So I rolled up my sleeves and took a shot for the seasonal flu. I encouraged everyone to get the H1N1 vaccine as soon as it becomes available. I urged people to cough politely into a napkin or their sleeve. I had hand sanitizer installed in the common areas at city hall. I greeted the Chairman of the City Council with a fist bump and it made the local news.

It became a running theme in City Hall. The mayor would greet you with a fist bump.

A day before His Holiness came to the city, I spoke to the Dalai Lama's protocol team and they said he would not be upset or offended being greeted this way. In fact it has happened in the past.

So, armed with this information I decided to greet him when he arrived Tuesday in a similar fashion. Not because of any concern about H1N1. I greeted him this way because I'm a down to earth guy, who was raised by a single mother with four sons in public housing. I still tell everyone to call me Myron. I am now living a dream as the mayor of Memphis.

And Wednesday, as I sat and watched His Holiness accept an award from the National Civil Rights Museum in Memphis, the gravity of the moment was in no way lost on me. An international crusader for peace was here on the hallowed ground where the Rev. Dr. Martin Luther King Jr. took his last breath.

He offered his blessings, walked into the crowd, touched people. He carried himself humbly, not as one to be feared, but as a man, sharing his humanity, making us all better for it.

So in the final analysis, I know His Holiness is always happy to participate in local customs, however obscure. He is about peace and harmony, and a fist bump is just another expression of warm friendship that he again returned to me before he left.

And the "Hello, Dalai?" Well, that was just a bonus. He knew it was coming and we all laughed together.

The opinions expressed in this commentary are solely those of Myron Lowery.