WASHINGTON (CNN) -- Despite the drop in President Obama's approval ratings, Republican policies are still not as popular as Democratic policies, according to a new national poll. 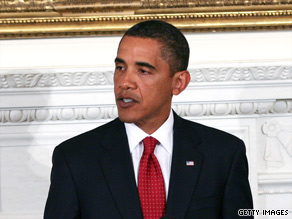 A CNN/Opinion Research Corporation survey released Friday morning indicates the GOP has gained some ground in polls in recent months, but Democrats still hold the advantage on key issues such as the economy and health care.

Fifty-two percent of people questioned say the president's policies will move the country in the right direction. An equal percentage feel the same way about the policies of the Democrats in Congress.

But the percentage of people who think Obama will move the country in the right direction has dropped 11 points since May, while congressional Democrats have seen a 5 point dip. Congressional Republicans have seen a 4 point rise over the same period.

Polls in recent weeks have shown Obama's approval rating in the mid-to-low 50s -- a significant drop from early summer, when most polls had his rating at 60 percent or higher.

"Barack Obama's drop in the polls has not made the Republican Party more popular than the Democrats," says CNN Polling Director Keating Holland. Still, he adds, "The GOP may be in a more competitive position -- a comparison with poll results from May suggests that the gap between the parties has been closing."

The survey suggests that, by 13 points, Americans think the Democrats rather than the Republicans would do a better job handling the economy and Medicare. The Democrats have a 9 point advantage on health care and an 8 point edge on Afghanistan. The two parties are tied on the question of how they'd handle taxes and the federal budget deficit. The GOP holds a clear advantage on just one issue -- terrorism.

"Two-thirds of all Americans are angry at the way the government in Washington is working, and the Democrats get the brunt of that anger," adds Holland. "But the amount of anger has not quite reached the level that polls found in 1994, when voters turned the Democrats out of power in Congress and elected a GOP majority for the first time since the 1950s."