WASHINGTON (CNN) -- CIA interrogators threatened an al Qaeda prisoner with a gun and an electric drill to try to scare him into giving up information, according to a long-concealed inspector-general's report due to be made public on Monday, sources familiar with the report confirmed to CNN. 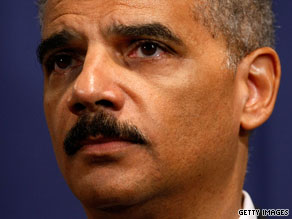 The gun and drill were used in two separate interrogation sessions against Abd al-Rahim al-Nashiri, one of the sources said. Al-Nashiri is accused of plotting the 2000 attack on the USS Cole, which left 17 U.S. sailors dead.

The sources did not want to be identified because the report, completed by the CIA's inspector general in 2004, has not yet been made public. A federal judge in New York has ordered a redacted version of the report released Monday as part of a lawsuit filed by the ACLU.

The interrogations took place in the CIA's secret prisons before 2006, when then-President George W. Bush moved all detainees from such facilities to the federal prison in Guantanamo Bay, Cuba, both sources said.

Details of the report were first published by Newsweek magazine late Friday.

Newsweek also said that, according to its sources citing the inspector-general's report, interrogators staged mock executions to try to frighten detainees into talking. In one instance, Newsweek reported, a gun was fired in a room next to one terrorism suspect so he would think another prisoner was being killed.

A CIA spokesman would not talk about specifics of the inspector-general's report but said all the incidents described in it have been reviewed by government prosecutors.

"The CIA in no way endorsed behavior -- no matter how infrequent -- that went beyond formal guidance. This has all been looked at; professionals in the Department of Justice decided if and when to pursue prosecution. That's how the system was supposed to work, and that's how it did work," CIA spokesman Paul Gimigliano said.

One of the sources, a former intelligence official who is familiar with the report, said that while the report "reaffirmed" the interrogation program, it "also showed some had strayed off center."

This official said that when CIA leadership found out about the drill incident, they were "angry as hell." The official called it "nickel-and-dime foolishness" that was not tolerated. The individual who used the drill was pulled from the program and "sharply reprimanded," the official said.

In anticipation of the release of the report Monday, Romero added, "Releasing the report with minimal redactions is essential to knowing what crimes were committed and who was involved."

The release of the inspector-general's report comes as Attorney General Eric Holder is considering whether to appoint a prosecutor to investigate the CIA interrogation program, begun by the Bush administration after the September 11, 2001, terrorist attacks.