Suzanne Simons is an executive producer at CNN as well as author of the book "Master of War: Blackwater USA's Erik Prince and the Business of War" (Collins, June 2009). 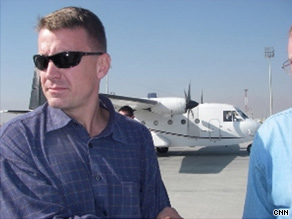 Erik Prince, founder of Blackwater, is pictured in Afghanistan in November 2007.

(CNN) -- The private military contractor formerly known as Blackwater has held classified contracts with the Central Intelligence Agency for nearly a decade, but an allegation that the contractor was part of a secret CIA program to kill al Qaeda operatives -- if true -- would take the relationship to a whole new level.

The CIA hired the private security firm Blackwater USA in 2004 to work on a covert program aimed at targeting and potentially killing top al Qaeda leaders, a source familiar with the program told CNN.

Former company executives deny knowing about the program. Current leaders of the company did not return calls to CNN. The CIA won't comment on classified contracts.

The classified program, canceled by CIA director Leon Panetta earlier this year, was part of a broader effort inside the CIA to develop the capacity to conduct training, surveillance and possible covert operations overseas, according to the source. The program was outsourced to contractors to "put some distance" between the effort and the U.S. government.

Other contractors were brought in for other parts of the program, another source said, and Blackwater's involvement ended by mid-2006.

But one thing is clear: The company that renamed itself Xe earlier this year in an effort to escape controversy surrounding a 2007 shooting in Baghdad that left 17 Iraqis dead has had a long relationship with the world's most famous spy agency.

When Erik Prince first opened his Blackwater training facility in the late '90s, his clients included special forces teams and law enforcement agencies from around the country. Prince had expressed frustration with the training facilities he visited during his time as a Navy SEAL, and a sizable inheritance allowed him the financial freedom to retire from the military and try his hand at creating a better facility.

His first clients were indeed SEAL teams. But they also included teams from other government agencies, including the CIA. Case officers and protection details, the people generally accustomed to working in the shadows, began showing up for training on the shooting range or the driving track in a rural part of North Carolina.

When then-CIA Executive Director Alvin "Buzzy" Krongard, whose own son was a Navy SEAL, visited the facility, former Blackwater President Gary Jackson suggested he meet with Prince, who worked out of an office in the Washington area. The two had lunch and Krongard immediately took a liking to the man who would later lead the world's most notorious private contracting company.

At the time, contacts like these were essential to building the business, so when terror struck the heart of America in September 2001, Prince called up his new friend Krongard and offered to help. Sources inside the agency at the time say that Krongard in fact, was pushing hard for Blackwater to be given the first urgent and compelling, no-bid contract to protect CIA facilities in Afghanistan. The military, it seems, wasn't up to the task of staffing such an effort.

Once awarded the initial contract, Prince maintained a close relationship with Krongard, and made trips to Afghanistan to make sure things were going smoothly.

The idea that the agency came to Blackwater for help on any other contracts, including one with the overall goal of locating and assassinating al Qaeda operatives, wouldn't come as a huge surprise, particularly since so much of the intelligence budget is spent on private contractors.

But with investigations under way into just what was done and by whom at the CIA under the Bush administration, people are remaining tight-lipped. Especially under the threat of possible prosecution, should it go that far.