BELGRADE, Montana (CNN) -- President Obama on Friday took his push for a health care overhaul to traditionally conservative Montana, saying a bill to extend coverage to the uninsured while helping those already with coverage will pass this year. 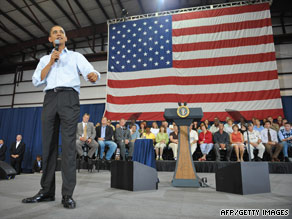 However, an influential Democratic representative said the House would only pass a health care bill in January or later, signaling continuing rifts within Obama's party on his domestic priority for 2009.

"We're taking some time to make sure it's done right," said Rep. John Murtha of Pennsylvania. "I don't know that we'll get something done before January, and even then we may not get it done. We're going to do it right when it's finally done."

Obama told a largely supportive Montana audience at his second of three town hall meetings this week that fixing the health care system requires improving health insurance practices and reducing the costs of treatment. He sought questions from skeptics of his proposed health care overhaul, seeking to confront some misconceptions fueled by opponents Democrats say are undermining the debate.

One man who identified himself as a proud National Rifle Association supporter and believer in the Constitution asked how the government would pay to expand health insurance coverage to 46 million uninsured people.

Obama responded with his oft-repeated explanation that two-thirds of the cost of overhauling health care -- estimated at about $900 billion over 10 years -- would come from eliminating waste and improving efficiency in the current system, which includes the government-run Medicare and Medicaid programs for the elderly and impoverished.

The rest would have to come from new revenue, he agreed with the questioner, and he called for reducing the amount of deductions that people making more than $250,000 a year can make on their income taxes.

"If we did that alone, just that change alone ... that would raise enough to pay for health care reform," Obama said, noting that would meet his election campaign pledge to avoid any tax increase on people earning less than $250,000 a year.

However, Obama said some taxes would have to be raised, and the crowd applauded when he said he believes people with more money, like himself, ought to pay a heavier burden.

"We've got to get over this notion that we can have something for nothing," Obama said. "That's how we got into this deficit and this debt in the first place."

In reference to emotional and heated debate at some other town hall meetings across the country in recent weeks, Obama told Rathie, "I appreciate your question, the respectful way you asked it, and by the way, I also believe in the Constitution."

Afterward, Rathie said he was impressed by Obama's performance but remained skeptical.

"I don't think he knows where that money's going to come from," he said. "If he does, he's not saying."

Obama noted there is more work to be done, with Congress seeking to merge at least four bills, along with a possible compromise agreement being negotiated by Democratic Sen. Max Baucus and five other members of his Senate Finance Committee, into a single bill in September.

Another questioner chosen when Obama asked for a skeptic identified himself as an insurance provider who wanted to know why Obama and Democrats are vilifying the insurance industry in the health care debate. Earlier in the meeting, Obama described what he called discriminatory practices by insurance companies that dropped coverage of people who became sick or refused to cover those with pre-existing medical conditions.

Obama noted some insurance companies are contributing to the reform debate, but said others are spending millions of dollars to try to defeat any health care legislation. For a health care overhaul to work for everyone, he said, it has to ensure all Americans are covered so that insurance companies have incentive to participate.

They won't be able to exclude coverage for pre-existing conditions or "cherry pick" healthy people while refusing coverage for sick people, Obama said, so increasing the total numbers covered will be the enticement.

On Saturday, Obama will hold another town hall meeting in Grand Junction, Colorado, before vacationing in some national parks with his family next week. In addition, White House spokesman Robert Gibbs said Obama will hold "some events not yet announced" in coming days.

While Obama has said consensus can be reached on health care reform, contentious town hall meetings held by lawmakers around the country have created a different impression.

The White House, and many Democrats in Congress, hope that by building support in the West, the president can start to turn the tide. Though the region is largely Republican, Obama made some inroads in the latest election. He won in Colorado and lost by just a slim margin in Montana.

However, Murtha's comments in Bentleyville, Pennsylvania, to CNN affiliate WJPA signaled continuing divisions among House Democrats over the scope and pace of health care legislation.

"We said to the speaker [House Speaker Nancy Pelosi], the leadership, let's not rush this thing," Murtha said. "Let's do it right, so we'll have a uniquely American plan, if the thing passes."

Obama's town hall events are just part of a larger Democratic strategy for winning support in the region.

The Democratic National Committee began a TV ad this week promoting the president's health care plan. A committee spokesman said the ad will run on national cable as well as on local cable in New Hampshire, Montana, Colorado and the District of Columbia.

The group Families USA, which supports the president's plan, also launched a campaign Thursday that includes an ad running in a dozen states -- among them Montana and Colorado.

But groups opposed to the president's plan have their own campaigns.

One voter in Livingston, Montana, not far from where the president spoke in Belgrade, summarized the kinds of concerns that she and many others in the region have.

"I believe that there is a health care crisis, I really do," Sonja McDonald, who voted for Obama in 2008, told CNN's Ed Henry on Thursday. "Do I believe that the government needs to be more involved? No!"

Henry met McDonald at a clinic that gets half its funding from taxpayers.

"The government being involved is fine," McDonald said. "It's just ... when they try and overstep, when they try to say, 'No, this is what needs to be done.' "