(CNN) -- There were tears, fears and lots of shouting Wednesday when Democratic Sen. Ben Cardin of Maryland held a town hall meeting on health care at Hagerstown Community College in his home state. 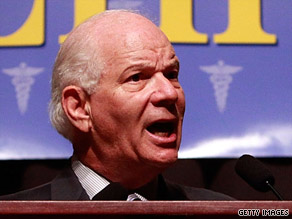 Sen. Ben Cardin, D-Maryland, has said he won't vote for a health care bill that raises the deficit.

Dozens of audience members crowded two microphones to ask questions, and many accused Cardin and President Obama's administration of seeking to bankrupt the nation's future by overhauling the health care system.

"This government is out of control. We are in debt up to our eyeballs," one questioner declared, her voice rising in anger. "What are you going to do to restore trust and faith in the American people that you know what you're doing?"

Cardin, often speaking above booing and shouts of protest, said he believes the government has a responsibility to ensure that all citizens have access to affordable health coverage.

Much of the crowd's anger focused on one of three House proposals approved by different committees. As a senator, Cardin is considering versions that differ from the House measures, and he noted several times that Congress would continue negotiating to derive a single bill from the various proposals.

He also repeated four times that he won't vote for a bill that raises the federal deficit, and explained how the goal of overhauling health care is to end discriminatory practices by the insurance industry while bringing down costs.

The more he spoke, though, the louder the shouts of protest became.

"How will more bureaucrats and probably fewer health care providers make health care better?" demanded another woman, adding that the plan seemed to be a "takeover, not reform."

Cardin acknowledged he wasn't going to change the minds of his loudest detractors.

"I was told that the people of Hagerstown are generally respectful," he said, adding that "90 percent of you are listening to what I'm saying."

As he left the stage, a woman in the crowd screamed at him and broke down crying.