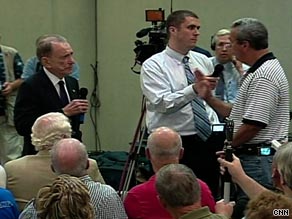 The meeting drew an overflow of about 250 people, with more gathered outside the hall to demonstrate for and against President Obama's push to expand health insurance for 46 million people without coverage while bringing down costs.

It was the latest in a series of emotional public meetings on the health care issue that have prompted Obama and Democratic leaders to complain of a campaign by opponents to drown out the debate with unruly disruptions.

At one point, Specter shouted into his microphone that demonstrators disrupting the proceedings would be thrown out.

"We're not going to tolerate any demonstrations or any booing," he said after one audience member shoved another making an unsolicited speech. "So it's up to you."

Watch the shouting and shoving »

Many in the crowd identified themselves as conservative Republicans, with one man noting they had voted for Specter before the senator switched parties this year.

One woman prompted a standing ovation by telling Specter: "I don't believe this is just health care. This is about the systematic dismantling of this country. ... I don't want this country turning into Russia, turning into a socialized country. What are you going to do to restore this country back to what our founders created, according to the Constitution?"

Specter responded by noting his support for the Constitution as a past chairman of the Senate Judiciary Committee on issues such as warrantless wiretaps.

"When you ask me to defend the Constitution, that's what I've been doing," Specter said.

Specter said that overhauling the health care system is about America taking care of all of its people.

"In our social contract, we have provisions that see to it that you take care of people who need some help," he said.

Several people asked if a health care bill would mean taxpayer dollars would pay for others to get abortions. Specter responded that any measure passed by Congress would allow people to choose a plan that didn't cover abortions.

The senator agreed with the crowd on some issues, saying he opposes mandatory counseling on end-of-life issues called for in a House of Representatives version of health care legislation.

Specter also vowed he would never support any bill that increased the federal deficit or took away a person's right to choose their health care coverage.

"I am opposed to anybody making a decision for you or me or anybody else about what health care plan we should have," he said.

Emotions ran high, with questioners complaining of government intrusion in their lives on health care and other issues. One man implored Specter and the government to "leave us alone," while another said the message Specter should take back to Washington is that he and others "want our country back."

The shoving incident occurred early in the 90-minute session when a man started shouting that he had been told by Specter's staff that he could speak, but he didn't get one of the 30 cards distributed to people allowing them to ask questions. Another man stood up and shoved the protester, and Specter approached the men shouting for calm.

"You and your cronies in government do this kind of stuff all the time," the protester shouted before leaving the hall. "I'm not a lobbyist with all kinds of money to stuff in your pockets. I'll leave you so you can do whatever the hell you do."

Specter remained calm most of the time, except when a woman asked if the bill meant a 74-year-old man with cancer would be written off by an overhauled health care system.

"Nobody 74 is going to be written off because they have cancer," he responded angrily. "That's a vicious, untrue rumor."

See an overview of the issue »

One man defended the rowdy behavior of the audience.

"I don't think we have bad attitudes," he said. "We're just being Americans." iReport.com: Attending a town hall?

The senator also tried to inject some humor, making sure to thank the lone person among the 30 questioners who supported the health care overhaul.

Obama has said an overhaul is essential for long-term economic stability.

Congressional action has slowed due to strong Republican opposition. Neither the House nor the Senate met Obama's goal of passing a bill before Congress' August recess.

Watch how Obama is preparing for his own town hall »

In particular, Republicans and some Democrats reject a government-funded public health insurance option, arguing it would lead to a government takeover of the health care system.

Most Democrats want a public option to ensure coverage is available to virtually all Americans and provide competition to private insurers.