(CNN) -- Sonia Sotomayor, who rose from humble roots in a Bronx, New York, housing project to a high-powered legal career, was sworn in Saturday as the 111th justice of the U.S. Supreme Court. 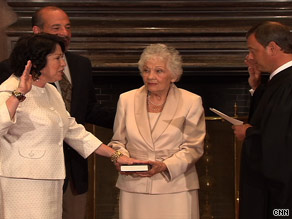 With friends and family looking on, the 55-year-old jurist took the judicial oath in the court's wood-paneled East Conference Room, pledging to "faithfully and impartially discharge and perform all the duties incumbent on me."

It was the first time such a ceremony was televised.

Chief Justice John Roberts administered the 62-word oath required of all federal judges. In a private ceremony just moments before, Sotomayor took a separate, constitutional oath across the hall. Both oaths are necessary for her to assume her new duties.

As her mother, Celina, held a ceremonial Bible, Sotomayor beamed as she waved to relatives and guests when she entered the room for the public ceremony. Among those in the room was her brother, Juan Sotomayor.

Roberts made brief preliminary remarks, telling the audience of about 60 that after the swearing-in, Sotomayor can "begin her duties as an associate justice without delay."

"Congratulations and welcome to the court," he said afterward.

Sotomayor made no statements and did not answer questions. She hugged her mother and several people in the front row.

The newest justice can begin moving into her chambers and preparing for the upcoming fall term. The other justices plan to return early from their three-month recess to hear a case September 9 on free speech and campaign finance laws.

Sources close to Sotomayor say she has already begun reading up on the caseload, and will soon formally hire four law clerks. She also will have two secretaries and a messenger to assist her.

Justice Anthony Kennedy was the only current Supreme Court member on hand for the swearing-in ceremony. David Souter, whom Sotomayor replaces on the bench, was not there. He has retired to New Hampshire.

The Senate confirmed Sotomayor on Thursday in a 68-31 vote. President Obama, who did not attend the swearing-in, will welcome his first high court appointee to the White House for a reception Wednesday.

Obama, who selected Sotomayor on May 26, said Thursday he was "deeply gratified" by the Senate vote.

Sotomayor, who watched Thursday's final vote surrounded by friends and family at the federal courthouse in Manhattan, was confirmed after senators spent a final day of debate rehashing the main arguments for and against her.

Democrats continued to praise Sotomayor as a fair and impartial jurist with an extraordinary life story. Many Republicans portrayed her as a judicial activist intent on reinterpreting the law to conform with her own liberal political beliefs.

See how Sotomayor measures up to other justices »

Sotomayor's confirmation capped an inspiring personal and professional journey. Her parents came to New York from Puerto Rico during World War II. Her father worked in a factory and did not speak English well.

She was born in the Bronx and grew up in a public housing project, not too far from the stadium of her favorite team, the New York Yankees. Her father died when she was 9. Her mother, whom Sotomayor has described as her biggest inspiration, worked six days a week as a nurse to care for her and her younger brother.

She worked at nearly every level of the judicial system over a three-decade career before being tapped by Obama.

Her supporters touted her as someone with bipartisan favor and historic appeal. President George H.W. Bush named her a district judge in 1992. She had served as a judge on the New York-based 2nd U.S. Circuit Court of Appeals since President Bill Clinton appointed her in 1998.

Prior to her judicial appointments, Sotomayor was a partner at a private law firm and spent time as an assistant district attorney prosecuting violent crimes.