NAIROBI, Kenya (CNN) -- U.S. Secretary of State Hillary Clinton on Thursday vowed to continue U.S. support for the government of Somalia's new president, whose government is waging a bloody battle against an Islamic insurgency. 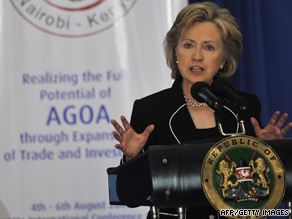 "The United States and the international community must serve as an active partner in helping the TFG [transitional federal government] and the people of Somalia confront and ultimately move beyond the conflict and poverty that have gripped their country," Clinton said at a joint news conference with transitional President Sheikh Sharif Sheikh Ahmed at the U.S. Embassy in Nairobi, Kenya.

The United States announced in June that it is providing weapons and ammunition to Ahmed's government as it fights al Qaeda-linked Islamist militants, including Al-Shabaab, which is considered a terrorist group by the United States.

The United States is concerned that Somalia's weak government could fall to the Islamist insurgency, as it did in 2006 before Ethiopian forces ousted the militants from power later that year.

"I think terrorists anywhere are threats to people everywhere," Clinton said Thursday. "Certainly if Al-Shabaab were to obtain a haven in Somalia which could then attract al Qaeda and other terrorist actors, it would be a threat to the United States."

Nations that Secretary of State Hillary Clinton will visit in Africa:

The FBI is investigating what appears to be a massive recruiting effort by Al-Shabaab in immigrant communities in the United States.

More than a dozen young men of Somali descent have disappeared from the Minneapolis, Minnesota, area in recent months. At least three of them have been killed in Somalia -- including a suicide bomber.

Also, Australia recently announced the arrests of four men with ties to Al-Shabaab who were suspected of planning a suicide attack on a military base in the southern state of Victoria.

President Ahmed is a former member of the Islamic Courts Union, which took part in the 2006 coup. His decision to renounce the bloody insurgency and try to establish peace in Somalia has put him at odds with Islamist hard-liners who are still battling for control of Somalia.

It also paved the way for his election to the president of Somalia's U.N.-backed transitional government in January.

Concerns are growing that Somalia could be the next base for al Qaeda as U.S. forces pound their positions in Afghanistan and Pakistan.

CIA Director Leon Panetta recently said that the intelligence agency is keeping tabs on the region as a possible destination for fleeing al Qaeda operatives.

"Our concern right now is that likely safe havens are areas in the Horn of Africa, like Somalia and Yemen, that are countries that because of their political status, can be attractive to al Qaeda in order to operate there," Panetta said in June.

"We are focusing on those countries as well in order to ensure that there is no safe haven for al Qaeda as we continue to pressure them, continue to push them, and hopefully continue to make the effort to destroy them, not only in Pakistan but throughout the rest of the world."

Somalia is not new territory for al Qaeda, according to CNN's terrorism analyst Peter Bergen.

"Al Qaeda was running training camps in Somalia in the early and mid-1990s," he said. "If this is now coming back, this is something that al Qaeda has already done and it's worrisome for the future. ...

"The fact that we're seeing evidence of this already happening in both Yemen and Somalia suggests that -- A -- the drone program in the tribal areas of Pakistan has been effective, but -- B -- you know it's pushing al Qaeda into areas where they'll build up larger operations."

Residents and journalists in Mogadishu, Somalia's capital, have reported seeing foreign fighters among Al-Shabaab. Those foreign fighters have recently distributed recorded messages from al Qaeda chief Osama bin Laden calling for the overthrow of the government.

Al-Shabaab, also known as the Mujahideen Youth Movement, is waging a war against Somalia's government to implement a stricter form of Islamic law, or sharia.

Somalia recently called on its neighbors to send military forces to help government troops stop hardline Islamist militants from taking over. The call for help came after a third top politician was killed in the ongoing fighting.

The deaths include Mogadishu's police chief and Somalia's internal security minister, who was killed in a suicide car bombing in the central city of Beledweyne.

A Pakistani militant who is a high-ranking official in al Qaeda is leading the fight against Somalia's government, said Sheikh Adan Madowe, Somalia's parliament speaker.

He and other Somali officials have warned that militants will spread fighting into the rest of the region if they topple the government in Somalia.

"Al-Shabaab is a threat to the whole world," Somali Information Minister Farahan Ali Mohamoud told CNN. "First to Somalia, to the neighborhood, and to everywhere they have disagreed with."