ALEXANDRIA, Virginia (CNN) -- Former U.S. Rep. William Jefferson of Louisiana was convicted Wednesday on 11 of the 16 corruption charges against him in a case that included the discovery of $90,000 in his freezer. 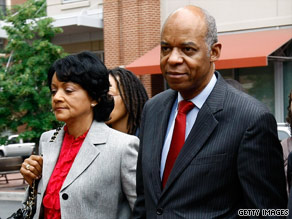 Jefferson, a 62-year-old Democrat, was indicted by a federal grand jury on June 4, 2007, about two years after federal agents said they found the cash in his freezer. Authorities said the cash was part of a payment in marked bills from an FBI informant in a transaction captured on video.

Jefferson had pleaded not guilty. He faces a maximum possible sentence of 150 years in prison, with sentencing tentatively set for October 30.

After the verdict on the fifth day of jury deliberations, U.S. District Judge T.S. Ellis turned down a prosecution request for Jefferson to be taken into custody, ruling that he posed no flight risk.

The verdict showed that "no person, not even a congressman, is above the law," said U.S. Attorney Dana Boente of the Eastern District of Virginia. Asked what might have turned the case in the prosecution's favor, Boente said: "We always thought that a powerful piece of evidence in this case was $90,000 in a freezer."

A stern-faced Jefferson emerged from the courthouse with his lawyer, Robert Trout, who said the verdict would be appealed.

"We're very disappointed that the jury disagreed with us," Trout said.

Asked how he was holding up, Jefferson smiled briefly and answered, "I'm holding up," before walking away.

Jefferson was accused of using his congressional clout between 2001 and 2005 to solicit and receive hundreds of thousands of dollars in bribes for himself and his family in exchange for promoting products and services in Africa, especially Nigeria, and elsewhere.

The information on the cash discovered in Jefferson's Washington home in August 2005 was revealed in an affidavit used to obtain a warrant to search Jefferson's office in May 2006. Descriptions from the heavily redacted affidavit and pictures of the open freezer show bills wrapped in foil and tucked into frozen food containers, including a box for pie crusts and another for veggie burgers.

FBI agents told a judge the money was part of a $100,000 payment delivered by an informant in the bribery investigation, which led to guilty pleas by a Kentucky businessman and a former Jefferson aide.

Jefferson, who graduated from Harvard Law School, represented Louisiana's 2nd Congressional District, which includes most of the New Orleans area He held office for 18 years, or nine terms, before he lost his House seat to Anh Joseph Cao in the December 2008 election.

"This is a difficult day for the people of New Orleans and Louisiana, but now we can turn the page on a negative past to focus on a positive future," Cao said. "My thoughts and prayers go out to Mr. Jefferson and his family during this time."

As a representative, he served on the House Ways and Means Committee's subcommittee on trade and on the Budget Committee, and he co-chaired the caucus on Africa Trade and Investment as well as the caucus on Nigeria.

All About William Jefferson • Federal Bureau of Investigation • Nigeria