Commentary: Race and the American dream

Editor's note: A nationally syndicated columnist, Roland S. Martin is the author of "Listening to the Spirit Within: 50 Perspectives on Faith" and "Speak, Brother! A Black Man's View of America." Visit his Web site for more information. This piece originally ran in the June 2009 issue of Essence Magazine, where Martin works as a special correspondent and has a blog on Essence.com. 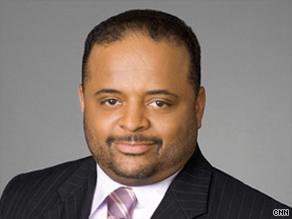 Roland S. Martin says Obama's election was not the culmination of the dream for African Americans.

(CNN) -- I've given nearly two dozen speeches across the country since Barack Obama was elected the 44th president of the United States.

African-Americans are still basking in the glow of this historic accomplishment, but I'm a bit perturbed with this sense that the election of a black president is the culmination of the dream outlined by the Rev. Martin Luther King Jr. in his famous address 45 years ago.

First, let's put things in perspective: The last 614 words of the speech -- the "I Have a Dream" portion -- must be understood within the context of the entire speech. Powerful words, but focusing on the last portion does a disservice to the rest of his text, which served as the true message of the day and his mission from that point until his death -- achieving economic parity for African-Americans.

Second, that historic march was not just a March on Washington. It was organized as the March on Washington for Jobs and Freedom. That distinction is important because without the jobs and freedom part, we could simply see that day as more than 250,000 mostly black folks taking a walk in the park.

King understood that for African-Americans, full equality had nothing to do with whether his children could hold hands with white kids or go to an amusement park. He wanted his children to have the means to own that park one day. The real understanding of King's vision was that he wanted African-Americans to be on a level playing field so that we, too, could partake in the riches of this vast nation.

So what does this have to do with Barack Obama being elected president?

It's simple. The election of a black man to the White House is a huge triumph. But while we praise, worship and wear our Obama buttons and swear we have overcome, barely more than half of our kids are graduating from high school, according to America's Promise Alliance, the children's advocacy organization founded by retired Gen. Colin Powell and his wife, Alma.

We know that the pathway to economic equality is determined by an education, so how could Obama's election mean King's dream has been fulfilled when we have these sad statistics to deal with?

Think about these numbers: As the national unemployment rate climbed to 8.5 percent early this year, joblessness among African-Americans reached 13.3 percent, higher than any other ethnic group.

Speaking of dreams, a 2008 survey conducted by the black-owned mutual fund company Ariel Investments and investment giant Charles Schwab reported that "for many younger African-Americans, saving for retirement is more of a dream than a priority." The survey says whites have twice as much saved as blacks, and we contribute about 50 percent less to 401(k) plans than whites.

I'm not looking to pour cold water on Obama's accomplishment. But we desperately need a reality check to understand that with 95 percent of African-Americans voting for Obama, going to the polls was the easy part in this effort to change America. Now it's time for us to get to work to achieve not just King's dream but the American dream.