WASHINGTON (CNN) -- President Obama said Wednesday he was unable to guarantee that health care reform won't change how Americans get medical treatment, but he said any changes would be necessary and positive. 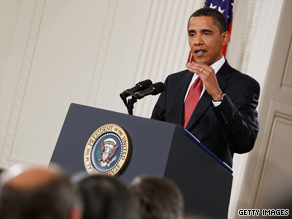 In a nationally televised news conference dominated by the health care issue, Obama delivered lengthy statements in response to Republican attacks on proposals he favors.

He also attempted to ease the concerns of people left confused by the fierce debate in Washington.

He repeatedly emphasized that the spiraling costs of the current system would bankrupt the nation while denying coverage to millions more Americans.

Asked directly if he could guarantee that an overhauled health care system won't change how people receive treatment, Obama said no.

"The whole point of this is to try to encourage what works," Obama said, addressing concerns that reform would take away the ability of people to choose their doctors and treatment.

Watch Obama describe importance of "getting it right" »

The reform proposals he backs would have experts make decisions based on the best medical treatment, not accountants attempting to save money or doctors prescribing treatments that bring the highest fees, Obama said.

"This will require patients ... to be more discriminating consumers," he said. "I think that's a good thing. Ultimately ... we just can't afford what's happening right now."

Republican opponents of Democratic bills in the House and Senate said earlier that most Americans like the current system, which they said must be made less expensive and more accessible.

Obama and Democratic leaders say the problems are deeper and systemic, and the president spent all of his seven-minute opening statement at the 52-minute news conference outlining the challenges and his proposed solutions.

"Even as we rescue this economy from a full-blown crisis, we must rebuild it stronger than before -- and health insurance reform is central to that effort," Obama said.

"If we do not control these costs, we will not be able to control our deficit. If we do not reform health care, your premiums and out-of-pocket costs will continue to skyrocket," he said.

As he laid out the list of benefits that health care reform offers, he dropped a direct reference to a government-funded public health insurance option.

Until now, Obama has consistently touted the government-funded public option as competition for private insurers in expanding access to health coverage.

It was unclear if Obama changed the wording to avoid a label opposed by Republican supporters, or if he was signaling a policy shift toward a compromise being negotiated by the Senate Finance Committee to have health insurance cooperatives rather than a government-funded public option.

Republican Sen. Charles Grassley of Iowa told CNN on Wednesday that the Finance Committee was not considering a public option.

Later in the news conference, Obama responded to a question about the public option by saying it was intended to "keep the insurance companies honest."

Speaking about the benefits of his plan, he said it would offer "security" and "stability" to sick and healthy Americans.

"It will prevent insurance companies from dropping your coverage if you get too sick. It will give you the security of knowing that if you lose your job, move, or change your job, you will still be able to have coverage. It will limit the amount your insurance company can force you to pay for your medical costs out of your own pocket. And it will cover preventive care like check-ups and mammograms that save lives and money," he said.

He also said his program would not add to the deficit over the next decade, addressing concerns from Republican opponents and fiscally conservative Democrats over the costs of the program.

Watch Obama describe how he plans to pay for health reform »

"Already, we have estimated that two-thirds of the cost of reform can be paid for by reallocating money that is simply being wasted in federal health care programs. This includes over $100 billion in unwarranted subsidies that go to insurance companies as part of Medicare -- subsidies that do nothing to improve care for our seniors," he said.

Instead, he said, the debate is about people lacking health insurance because they can't afford rising costs, get denied due to a pre-existing condition, or lose their jobs.

"This debate is not a game for these Americans, and they cannot afford to wait for reform any longer," Obama said.

He also confirmed an agreement with fiscally conservative Democrats to create an independent group of doctors and medical experts empowered to eliminate waste and inefficiency in Medicare.

Obama said he backed adding such a panel to health care reform legislation.

Such a panel could both save money and "ensure the long-term financial health of Medicare," Obama said.

It follows the president's Tuesday meeting with Democrats at the White House, dubbed a "serious working session" where "major progress" was made, Dunn said.

Officials said Obama will be taking a more hands-on approach with members of Congress in the days and weeks to come regarding the health care debate.

One official said the administration is aware that "if any of these three groups abandon the effort the bill would be impossible to get out of committee, much less pass."

Aides say the president and lawmakers also discussed the public option versus a co-op option.