WASHINGTON (CNN) -- Rep. Patrick Murphy, an Iraq war veteran, kicked off a push Wednesday to persuade Americans that the president should repeal "don't ask, don't tell," the policy that prevents openly gay troops from serving in the U.S. military. 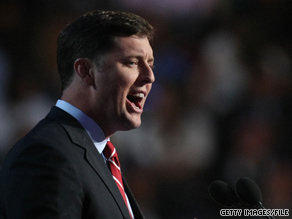 Rep. Patrick Murphy, a veteran of the Iraq war, says it is time to end "don't ask, don't tell."

Murphy, D-Pennsylvania, appeared along with several gay, lesbian and straight service members to launch the initiative.

"We can not afford to wait any longer" for the policy's repeal, Murphy said at the National Press Club in Washington. "Now is the time to change this, when our military is stretched so thin" with wars in Iraq and Afghanistan.

A "Voices of Honor" tour, sponsored by the Human Rights Campaign, will travel across the country, sharing stories of gay, lesbian and straight servicemen and -women in hopes of garnering support for the Military Readiness Enhancement Act, which would repeal the law that established the policy.

The act would allow gay and lesbian Americans to serve in the military without concealing their sexuality.

Human Rights Campaign President Joe Solmonese said in a statement, "We must repeal this discriminatory policy and ensure that our military can recruit and retain the best and the brightest troops regardless of their sexual orientation."

President Obama has said he wants Congress to repeal the law, but gay rights groups have been angered that the president has not done more to hasten the change.

Since Obama took office, 287 service members have been discharged for being gay, according to the Servicemembers Legal Defense Network, which supports the repeal.

The bill, introduced by Colin Powell in 1993 and signed into law by President Clinton, ended the protocol requiring service members to state their sexual orientation.

But Powell now says the time has come to review whether the policy is still necessary.

"Sixteen years have now gone by, and I think a lot has changed with respect to attitudes within our country, and therefore I think this is a policy and a law that should be reviewed," Powell said.

"I am withholding judgment, because the commanders of the armed forces of the United States and the joint chiefs of staff need to study it and make recommendations to the president and have hearings before the Congress before a decision is made," he added.

The military's top uniformed officer, Adm. Mike Mullen, said Wednesday that it's clear the president wants the law changed and that he is beginning to work with his staff on how a repeal would be implemented. But, he advised, with two wars ongoing, that the decision not be hurried.

"When I talk about looking at this in the future, we have a force that's under extraordinary stress, and it's a force that, you know, should this occur, I think we need to implement in a way that is -- that recognizes the challenges and the stress that we're under right now," said the chairman of the Joint Chiefs of Staff. "But, if it does occur, when it does occur, you know, I'll certainly lead it and carry it out."

Defense Secretary Robert Gates recently said he is looking for ways to make the policy "more humane," including letting people serve who may have been outed because of vengeance or a jilted lover.

But there is plenty of opposition to the repeal. In the spring, more than 1,000 retired officers signed a letter organized by Flag and General Officers for the Military urging Obama to uphold the law.

"We believe that imposing this burden on our men and women in uniform would undermine recruiting and retention, impact leadership at all levels, have adverse effects on the willingness of parents who lend their sons and daughters to military service, and eventually break the all-volunteer force," the letter said.

The recent shooting death of a sailor has also raised questions about acceptance of gays among troops. The family of Seaman August Provost of Houston, Texas, said they believe that he was killed because of his sexual orientation and his race.

But a spokesman for Camp Pendleton, where the shooting took place, said there was no indication early in the investigation that the killing was a hate crime.

Still, Genevieve Chase, a straight veteran of Operation Enduring Freedom and the founder of American Women's Veterans, said she believes that not much would change in the military if "don't ask, don't tell" were repealed. Chase appeared with Murphy at the event Wednesday in Washington.

Calling them service members of a "new era," Chase said, "Gays have been and are already serving openly. ... Allowing discrimination and bigotry to continue is what disrupts cohesion."

There is no clear timeline for when the bill will be debated in Congress. Obama has said he will sign the repeal if it comes to his desk.