Blacks in survey say race relations no better with Obama

(CNN) -- African-Americans really like President Obama, but more and more feel that race relations have not gotten better since he took office, a new national poll found. 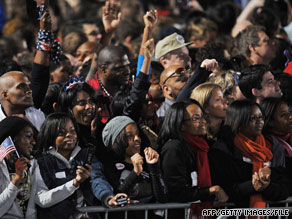 Ninety-six percent of African-Americans approve of how Obama is handling his presidency, according to a CNN/Essence Magazine/Opinion Research Corp. poll released Thursday.

The poll was conducted May 16-18, in telephone interviews with 505 African-Americans and 501 whites.

Blacks and whites had differing opinions of Obama's performance. More than 60 percent of blacks felt that Obama met their expectations, while 46 percent of whites did.

Both blacks and whites gave similar answers to a survey question about whether race relations will always be a problem in the United States.

The poll had a sampling error on these questions of plus or minus 4.5 percentage points.

All About Barack Obama • Racial Issues