WASHINGTON (CNN) -- Most of the weapons that Mexican drug cartels use are smuggled from the United States, but the U.S. government lacks a cohesive strategy to combat the arms trafficking, according to a Government Accountability Office report to be released Thursday. 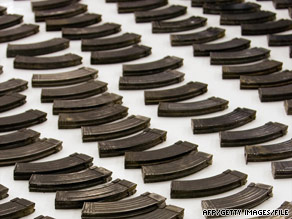 Assault rifle magazines are among weapons seized in April in northern Mexico near the U.S. border.

In Mexico last year, drug violence was blamed for the deaths of 78 soldiers and more than 6,000 others. This year, the drug violence has claimed more than 2,900 lives, according to the newspaper El Universal.

Much of the violence has affected the U.S.-Mexico border.

Over the last five years, about 87 percent of firearms seized and traced by Mexican authorities were purchased in the United States, a draft of the report says. Most of the weapons were acquired at gun shops and shows in border states, according to the report. Many of these are high-caliber and high-power weapons, including AK-47s and AR-15 semiautomatic rifles.

The two agencies tasked with curbing arms smuggling to Mexico, the Bureau of Alcohol, Tobacco, Firearms and Explosives and Department of Homeland Security, "do not effectively coordinate their efforts, in part because the agencies lack clear roles and responsibilities," according to the draft.

In a statement Thursday, W. Larry Ford, ATF assistant director, said the bureau and Immigration and Customs Enforcement "are working to finalize a memorandum of understanding to maximize our joint effectiveness to combat violent crime along the Southwest border."

Of the guns traced back to the United States, about 68 percent were manufactured there and about 19 percent were made in other countries and imported to the U.S. before being smuggled to Mexico.

"The U.S. government lacks a strategy to address arms trafficking to Mexico," the draft of the report says.

The GAO noted that U.S. anti-drug efforts in Mexico do not focus on weapons smuggling, and most of the efforts are aimed at keeping the flow of drugs from coming north, not stopping arms from flowing south.

The report will say that the $1.4 billion Merida Initiative, the biggest drug enforcement aid package the United States has given Mexico, does not provide dedicated funding to stop weapons smuggling.

Most of the weapons cross into Mexico in vehicles crossing international bridges along the border, where southbound inspections by customs officials are rare.

Customs and Border Protection, which oversees the international crossings, reported that in the 2008 fiscal year, a total of 70 weapons were seized in southbound inspections.

In the same time period, Mexican authorities captured 30,000 weapons, 7,200 of which were submitted to the ATF for tracing, the report says. The gap between seizures and traces is a statistic that gun-rights groups say puts in question whether the majority of illegal guns in Mexico really come from the United States.

The report will be released Thursday afternoon at a hearing on arms trafficking held by the House Foreign Affairs Subcommittee on the Western Hemisphere.

All About Mexico • U.S. Customs and Border Protection