(CNN) -- He called himself the Lion King, the emperor of Galveston, and more simply, "the government." 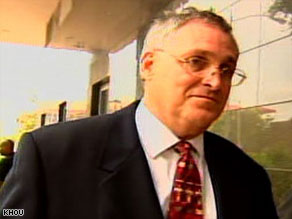 Charges of sexual misconduct against Judge Samuel Kent were dropped in exchange for an obstruction plea.

At 6-foot-4 and more than 250 pounds, he was impossible to escape in the close quarters of an office. And his alcohol-laden lunches could foreshadow vulgar, racist language and sexual assault.

That was the description of U.S. District Judge Samuel Kent at a hearing Wednesday before a House Judiciary Committee task force considering his possible impeachment. The stunned hearing room was silent as two victims of Kent's sexual misconduct detailed their personal ordeals that lasted years.

The Texas judge pleaded guilty in February to one count of obstruction of justice for lying to investigators about the sexual misconduct in his Galveston, Texas, courthouse. It was the first case of sexual abuse against a sitting federal judge.

Though he acknowledged in his plea that the events had occurred, the charges covering the sexual misconduct itself were dropped as part of the plea agreement. He had previously insisted the sexual events were consensual.

Kent, who turns 60 this month, was sentenced in May to 33 months in prison and ordered to surrender on June 15. He also was ordered to undergo treatment for alcoholism while in prison.

Both Kent and his lawyer, Dick DeGuerin, declined to appear at Wednesday's hearing. A statement from Kent accepted in the record said he was unable to travel to the hearing due to physical and mental problems. In the statement he admitted to nonconsensual sexual contact with the two woman, which he said may have resulted from difficulties in dealing with the death of his first wife and other issues.

"Judge Kent and I refuse to be part of the circus," DeGuerin said in the statement, sent by e-mail, calling the hearing an unnecessary spectacle. "All sexual misconduct allegations against Judge Kent were dismissed in court. The highly exaggerated, yet salacious and scandalous testimony of his former personal secretary and his former case manager is irrelevant to the grounds for impeachment and served no purpose other than to allow a few politicians to posture publicly."

If impeached, Kent would lose his judicial salary and pension. His letter to the task force noted that would leave him "penniless" and without health insurance. Kent also submitted a letter Tuesday to President Obama in which he said he will resign as of June 1, 2010, effectively extending his salary for a year that he is scheduled to spend in prison.

"Judge Kent and his lawyer are banking on the fact that impeachments take time, literally," said Rep. Lamar Smith, R-Texas. "Judge Kent receives $465 of his taxpayer-funded salary every day he remains in office. We are here today to put an end to Judge Kent's abuse of authority and exploitation of American taxpayers."

But it was the emotional and sometimes halting testimony of Cathy McBroom and Donna Wilkerson that provided the most powerful evidence. The two Texas women sat side-by-side at the witness table, never smiling, and recounted events that Kent's guilty plea acknowledged had occurred.

"I was a seven-year victim of Sam Kent's sexual and psychological abuse," said Wilkerson, 45, the judge's personal secretary. She said the first incident occurred on her fifth day on the job, when Kent pinned her against his office door and kissed her on the mouth.

Similar incidents, many of them much worse, occurred "once or twice a month" over the ensuing five-plus years, Wilkerson said. It usually happened when Kent returned from long, drunken lunches, when his language would turn vulgar and racist, and included inappropriate touching and groping "outside and inside clothes" and putting her hand on his crotch, she said.

Details of what she called "worse sexual assault" were included in her written statement to judicial investigators.

McBroom, a court employee who lodged the original complaint against Kent in 2007, described similar incidents. She said some occurred within obvious earshot of security guards, but she believed no one would help because of Kent's power in the courthouse.

"I even said, 'Judge, the guards are right outside. I know they can hear us,'" she recalled about one incident. "He said, 'I don't care who hears us.' He wasn't afraid of that at all, and that made me more frightened. I guess he thought he was powerful enough that no one would come to help me, and he was right."

Wilkerson told the committee that Kent often referred to himself as an all-powerful figure, calling himself the emperor of Galveston, the Lion King and the man wearing the horned hat. Both women quoted Kent as frequently saying: "I am the government."

In the most emotional moment, Wilkerson described trying to tell her teenage daughter to never endure any sexual misconduct, even if it meant harsh consequences such as losing her job.

"How could I look her in the face and tell her these things when I couldn't do it myself," she said, her voice cracking. "So I had to come forward. I had to do the right thing."

Rep. Adam Schiff, D-California, who chaired the hearing, thanked both women for testifying, saying Kent would still be on the bench if they had not come forward. He said the task force will meet soon to consider whether to recommend impeachment to the full committee.

All About U.S. House Committee on the Judiciary