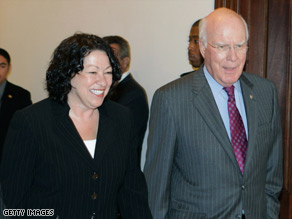 Sotomayor was commenting on the issue of race and gender in her judicial philosophy, Leahy said.

The Supreme Court nominee met with Leahy while making the rounds with key senators on Capitol Hill.

Some of Sotomayor's critics have raised the matter by highlighting a 2001 speech in which she said that a "wise Latina woman, with the richness of her experiences, would more often than not reach a better conclusion than a white male who hasn't lived that life."

Leahy praised Sotomayor's experience, asserted that she has a "great legal mind" similar to that of retiring Justice David Souter and ripped Sotomayor's critics for launching "the most vicious [attacks] I've ever seen."

Watch Leahy's comments on his meeting with Sotomayor »

He seized on remarks by Rush Limbaugh and former House Speaker Newt Gingrich, who called Sotomayor a "racist," as well as former Rep. Tom Tancredo's assertion that her association with the Hispanic group La Raza is the equivalent of membership in the Ku Klux Klan.

Leahy said the Judiciary Committee's hearings would not begin until after June, but that "with the attacks that have been going on against her, I believe it'd be irresponsible to leave her hanging out there."

Sen. Dianne Feinstein, D-California, met with Sotomayor later in the day, and said the judge described the controversial Latina remarks a "poor choice of words."

Feinstein added that she and Sotomayor "generally" discussed the issue of abortion and that the judge believes strongly in legal precedent.

"I believe she has a real respect for precedent and ... if that is really true then I will agree with her, and I believe it is," the senator said.

The sit-down with Reid was largely a "get to know you" session in which he talked about Sotomayor's humble Bronx, New York, roots and path to success, according to two Democratic sources familiar with the meeting.

Reid largely avoided questions about her positions and approach to the bench, knowing she will get those questions from members of the Judiciary Committee, one of the sources added.

Sen. Jeff Sessions of Alabama, the ranking Republican on the Judiciary Committee, promised after meeting with Sotomayor that she would get a "fair hearing."

"I'd like people to say this is the best hearing we've ever had," Sessions said.

He said that while he didn't directly bring up her Latina remarks, he did discuss the "idea and concept of personal feelings [and] how that influences a decision."

He also urged Leahy to keep an "open mind" on a timetable for Sotomayor's confirmation calendar, arguing in favor of hearings in September.

Reid also was noncommittal when asked about a timetable, saying only that "we're going to do this as quickly as we can [but] won't set any arbitrary deadlines."

President Obama has called for his nominee to be confirmed before the start of the next Supreme Court term in October.

Sotomayor also was expected to spend part of the day on Capitol Hill meeting with lawmakers from her home state of New York, Sens. Charles Schumer and Kirsten Gillibrand.

"And so, I think what this could boil down to -- and we'll have to examine very carefully all of the evidence -- is what this judge's view of judging is," he said.

While often a mere formality, initial meetings on Capitol Hill for a Supreme Court nominee occasionally can prove to be pivotal.

Most recently, Justice Samuel Alito and Chief Justice John Roberts' Senate meetings went smoothly. However, President Bush's nomination of Harriet Miers was pulled after after senators in both parties emerged from private sessions calling her unqualified.

Most of Sotomayor's critics concede that she is qualified, though they are still expected to use their meetings to ask a number of pointed questions.

See how the confirmation process works »

The Supreme Court is set to rule on an appeal of Sotomayor's decision by the end of its current term in June.

Watch how the firefighters' case will go before the U.S. high court »

"She's going to have to convince me that if I found myself in court against someone she had a lot of empathy for, that I'd get a fair shake," said Sen. Lindsey Graham, R-South Carolina. "If she can't, I won't vote for her."

Republicans, however, have their own political worries.

CNN political analyst David Gergen said they risk putting themselves on trial in front of Latino-Americans.

"If they line up uniformly in hostility against the first Hispanic woman to the court, they risk paying a terrible price with the biggest and fastest-growing minority in this country," Gergen said.

Despite what seems at the moment like a nomination on a fast track, Republicans are still demanding ample time to read Sotomayor's thousands of rulings before public hearings begin.

CNN's Jim Acosta and Dana Bash contributed to this report.